The Reluctant Billionaire ..........the 6th Duke of Westminster.

As things stand generally I haven't the faintest fascination with the aristocracy !!  However, in previous times, I confess I had a number of questions that I could always place at the door of the 6th Duke of Westminster and his bewildering stance towards conservation matters.  In many ways the recent book by Tom Quinn goes a long way towards answering these. 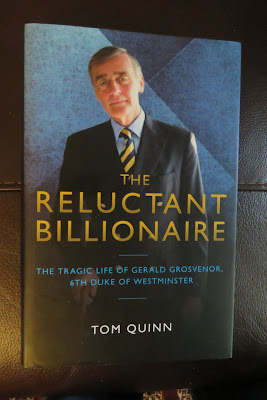 Incidentally, whilst the book does cover that period and activities, for those who might expect me to comment on the more lurid aspects of the Duke's behaviour in later life, then I'm afraid I'm going to disappoint !!

During the 1980's and 1990's I managed the RSPB's NW England Region . Within this lay the Forest of Bowland, then the most important stronghold for breeding Hen Harriers in England and within that area was the Abbeystead Estate owned by the Duke of Westminster.  During that time, be it from the point of view of monitoring or protection activities. I firmly believed in a strategy of direct contact with the various Estates and shooting tenants, however difficult that proved to be !    As a result we enjoyed access arrangements with the vast majority of Estates , but never with Abbeystead.

In 1981 there was around 40 ( yes, FORTY ) nesting attempts by Hen Harriers in Bowland overall. This figure reduced both rapidly and considerably, with only one successful attempt in the mid 1980's.  Persecution was rife, despite the denials, and egg collecting was also another pressure in those times. Eventually, however, within the 1990's we achieved a situation where around twenty or   so young was successfully reared each year.  The 6th Duke had purchased Abbeystead Estate from the Earl of Sefton's estate in 1983.  Moorland management had been neglected and the area supported a healthy population of Hen Harriers.  Whilst it still attracted these birds in later years, success was extremely limited as an intensive programme  of heather management was embarked upon in order to produce optimum conditions for grouse shooting.  With no access permissions being granted monitoring nesting attempts from the "fence lines" of adjacent Estates was less than satisfactory. This led us to request such permission on several occasions, but it was always refused.

Now, you might think it obvious why the RSPB wasn't being granted permission and I can't say that I would counter any such conclusion. But what I would say is that , on certain occasions the Duke himself chose to attend such meetings and was always welcoming, extremely polite and attentive to our views. However, he never seemed to embrace "the wider conservation cause ".  This intrigued me no end as media reports  often referred to him as wishing to be seen as a countryman and nothing more. As the book more than adequately explains he was clearly unhappy in his early years and sought solace in the Fermanagh countryside where he was brought up.  It appears that it was in these early years that he developed his love of , and undoubted skill, in shooting.

His schooling and adult life were riddled with self doubt and unhappiness, but his love of the countryside and shooting remained . A wealthy man, able to maintain absolute privacy around himself  and enjoy the pursuit of an obsession, went a long way towards explaining his clear wish not to be involved  directly in conservation initiatives.  But I was still intrigued as he was willing to be aligned to other causes on the periphery of "countryside",  such as Rural Employment  and my suspicions remained.  The oft proffered conclusion by many was that the Estate sought to restrict access so as to pursue management practices that ran counter to the law and, over time, a number of incidents came to light.  I still thought that, however conclusive such arguments might be , there was something else which lurked in the background and was the starting point for such a repeated and entrenched position.

It came as a bit of a shock on reading Tom Quinn's book to learn that the Duke actually hated conservationists, often referring to them privately as "tree huggers" and "pinkos" ( what , a lad from Barnsley I ask, never !! ).  His was a visceral objection to people who sought in any way to regulate shooting and , as an extension, to amend the limits of privilege that he enjoyed.  Whilst it might have been a product of his upbringing and good manners I, nonetheless, don't understand why he even bothered to participate in meetings or become involved in issues against which he was adamantly opposed.  Retiring behind the protection of high walls, Rhododendron bushes and minions is the oft applied defence , which certainly now seems to apply to the position the Abbeystead Estate has adopted.  So, we were never going to make headway, ever.  He did declare on certain occasions his absolute intolerance of Hen Harriers and clearly, in the background to all this , was an intention to resist anything that interfered with shooting or management for shooting.

So, finally the conundrum was solved !

Incidentally,  I found the book utterly absorbing and well worth the read if only to be educated on the bizarre collection of factors that result in certain individuals enjoying a life of privilege and wealth, not all of which appear logical or justified.  However, wealth brings neither health not happiness, as the book aptly outlines,  despite there being the opportunity to seek solace and privacy, and even excessively indulge ones obsessions. A complex man undoubtedly,  whose interests , as a self declared countryman, might have been extended, and achieved so much more ,by being a leader within a peer group to which very few have access..  But there again, there were grouse numbers to consider and those bloody Hen Harriers. Perhaps today's abysmal situation associated with the persecution of raptors in many upland areas illustrates that the private opinions against conservation of Gerald Grosvenor, 6th Duke of Westminster, continue to be silently embraced and even taken further by some within the same cohort .

Posted by John S. Armitage at 11:51 AM No comments:
Email ThisBlogThis!Share to TwitterShare to FacebookShare to Pinterest

After an unexplained period of silence I thought I'd better provide some words aimed at clarifying why I've issued no Blogs for the best part of three months. To those who, from time to time, have dipped into the site and found nothing new, I offer an unreserved apology.

Immediately after my last posting in August  I went down to Cornwall, ostensibly to spend some time seawatching in the hope of picking up on some of the goodies that occur  around that time and into September.  I thoroughly enjoyed the first part of the holiday and had some good birds, And then my fortunes changed !!  Following an exploration of the woodland lining the access route down to Limorna Cove I decided to park adjacent to the quay and scale the nearby coastal path, which I guess eventually leads around to Porthgwarra.

All went well initially, with Manx and Sooty Shearwaters and even a distant Minke Whale . despite the weather being drizzly and miserable. After almost three hours I decided to return to the car, but slipped on the footpath during the descent, gave myself a bit of a battering and, in particular, injured my left knee  (  there goes the football career, but I'm relieved of the burden of learning Spanish or Italian !!! ).  The rest is history as they say.   I haven't been very mobile in the aftermath, although  I've still managed to spend three weeks at Spurn, spending prolonged periods in the car seawatching or perched up on the Humber seawall !!

It all seems to have paid off, as things have gradually improved, but it's been a slow process.  I'm determined to see things through as, having tried unsuccessfully to hasten things on a couple of times , I'm now happy to patiently await the final outcome which I'm confident will arrive previous to the New Year.  Not being able to pursue things in a chosen fashion is frustrating, but I've now decided to issue several Blogs on what might best be described as " passive issues"  and hope that these bridge the gap up to the time when I'm fully active again. Incidentally, the rumour that I fell off a cliff whilst twitching is a bit overstated !!

So, watch this space, and thank you for your   patience.
Posted by John S. Armitage at 11:26 AM No comments:
Email ThisBlogThis!Share to TwitterShare to FacebookShare to Pinterest
Newer Posts Older Posts Home
Subscribe to: Posts (Atom)