Yesterday saw various sections of barbed wire had been removed around fields on the Spurn Penninsula, a commendable response from the Yorkshire Wildlife Trust Ltd. From personal experience such is not a nice job, or a quick one for that matter, so the final outcome might take a little while !

Apparently a single strand will remain across the top of the fence line as an experiment ( per a Facebook entry ).  Such is common practice where cattle are present and, given the area has seen both Long-horned and Highland cattle present in the past, one can only imagine this is providing for future management approaches. It must also be remembered that appointed graziers can offer opinion as to the provisions around areas where their stock will eventually be present.  An additional modification that might be considered at some future point is the installation of "deer gates". Simply a location where the fence line height is lowered slightly and wooden protection is placed across the wire which allows deer to leap across the fence more easily and safely, which they soon become habituated to.

However, overall, the area has the developing potential to be safer for wildlife than previously, which is surely what everyone wanted.
Posted by John S. Armitage at 7:59 AM No comments:
Email ThisBlogThis!Share to TwitterShare to FacebookShare to Pinterest

I've been staying near  Spurn NNR for a few days enjoying excellent weather and a steady flow of birds !  Sadly this idyll was interrupted last Friday with an incident involving a Roe Deer which had been caught up on a barbed wire fence, and has caused yet another outcry for change!

I witnessed the whole episode, admittedly not visually , but aurally via the radio network that is operated by the Observatory as I was driving back towards Kilnsea.  A report,via the radio system , pinpointed the incident as being north of the new Yorkshire Wildlife Trust Centre along one of the field systems nearby to the Canal Zone.  This wouldn't reach the YWT at this point as a different channel /wavelength is used by them.  Local birder, Steve Exley, sprang into action, went to the site with the intent of releasing the hapless animal whilst Johnnie Fisk ( Spurn Bird Observatory ) undertook to advise the YWT. 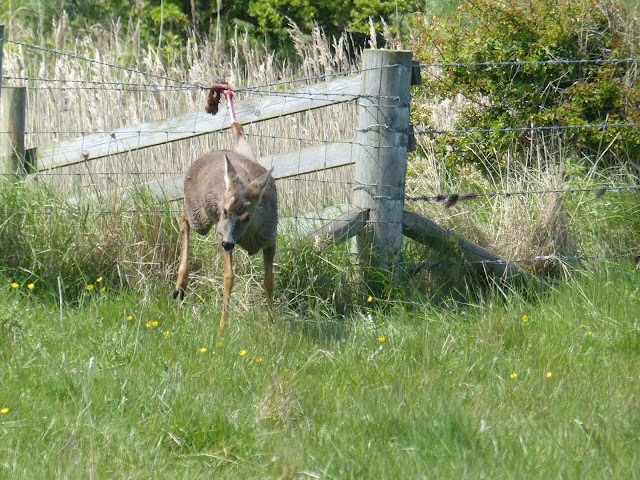 The sight was not for the faint-hearted with the animal firmly secured to the barbed wire fence , having stripped off the skin and muscle from its lower, rear left leg. Steve Exley managed to release it but the animal escaped in the immediate aftermath, doubtless to endure a drawn out period of suffering before an inevitable death.  It was some time before I visited the general vicinity when, of course, everything had subsided, although a staff member from the Centre was patrolling the road by bicycle anxiously looking out over the fields, although I doubt the animal would have been mobile.  A sad incident which seems likely to be repeated unless action is taken.

This is not the first time such an incident has occurred.  Previous victims have included Mute Swan, Little Egret, Cormorant and, of course, Roe Deer.  Whilst the Trust use sheep to "manage" some of its grassland areas the fencing specification doesn't need to match that required by the presence of Charolais cattle !!  Some time ago a small number of Long- horned cattle were present in the area but a considerable time has elapsed since then within which the problem has emerged and a sufficient time has passed for the fencing to be modified.

If looked at "from the outside" the simple interpretation arrived at by the public is "why is the Trust utilising  an excessive amount of barbed wire in an area pledged to protect wildlife when it is seen to be putting such wildlife at risk".  The ambiguity is automatic !   If a policy was arrived at in the past and has since been seen to be wanting , then review it and effect the necessary changes. It's not enough to claim to be a guardian of wildlife, but to do what is necessary to promote that role and in its widest context.  Over the past three years I understand that complaints have been submitted and the matter raised generally on numerous occasions.  Sadly nothing appears to have changed . As a custodian and owner of a national nature reserve and adjacent designated areas,  the management techniques employed for these should be beyond reproach and meet not just the formal requirements,. but the expectations of the public too.  Despite the complaints of the past, no explanation has been forthcoming as to the continued need for the barbed wire or why it is retained. Regrettably, the whole issue appears to have been consigned to the back burner and treated with studied indifference !
Posted by John S. Armitage at 8:37 AM No comments:
Email ThisBlogThis!Share to TwitterShare to FacebookShare to Pinterest
Newer Posts Older Posts Home
Subscribe to: Posts (Atom)