One of Yorkshire's finest. 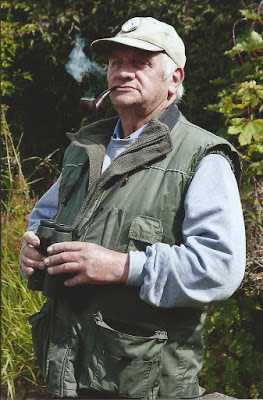 Tomorrow marks the occasion of David ( Dave ) Standring's  funeral , which sadly I can't attend. Whilst most people in attendance will remember him from within the last 30/40 years,  my earliest recollections are from a time when I was still at school !  He was older than myself, extremely knowledgeable, and. therefore, took on a role of mentor,  a state of affairs that I guess many other people have gained benefit from throughout the years.

We both lived off Racecommon Road in Barnsley and Sunday mornings would often see a successive pilgrimage begin to form as David called in to collect myself, David Ashurst and Malcolm Rhymer, who also lived nearby,  on the way to Worsborough Reservoir.  We'd invariably meet up with Alan Archer, Colin Bower and Mike Clegg before walking up the valley to Rockley Dam.  Our return journey around midday would then see us catching buses to either Wintersett Reservoir or Wath Ings.  We were also members of the Barnsley Naturalist and Scientific Society , although you could probably cram all the birders in the Barnsley area into  a single minibus in those days!  I benefited greatly from knowing those individuals, their knowledge of the area and what appeared to be infinite expertise. I was introduced to Wath Ings, Spurn and "the moors".  The latter involved a bus journey to the Flouch, beyond Penistone, a walk around Langsett Reservoir, then on to Midhope and Ewden , with a thorough scrutiny of the Broomhead area , before walking down to Deepcar at the end of the day to get transport back to town !  Great days, if not a little exhausting at times.  I found an old diary recently from 1957/58 which catalogues the frequent visits made to Worsborough and elsewhere, Patchwork in the making !!  As you might imagine David was a regular participant in all such activities.

Within this atmosphere one thing always stood out. David's utter curiosity, focus and, above all else , enthusiasm, characteristics that never went away.  Gradually we started to explore more widely. One trip involved Geoff Aynsley ( driver ), Bill Curtis, David and myself and a winter expedition to the Solway in January, 1963.  We "lived" in a Ford car for the weekend, got chased off the newly formed Caerlaverock Reserve, but such was the enthusiasm on show ( doubtless from David ) that the warden ( E.L. Roberts ?) gave us a telling off but then took us on a tour of the reserve in his Landrover ! Little did we know that that weekend would see the start of the two month long severe winter in store for the country. The journey back was a bit of a nightmare ( there were no motorways in place then of course ! ).!

In the early sixties my parents moved house to straight opposite what is now Carlton Marsh. How different it was then !  I began to visit Wintersett regularly and lost some contact with the Barnsley birders ( we're talking of an era when walking or cycling were usually the options on offer ! ).  Shortly after then I moved to London, was abroad, until returning in the seventies. Contact was infrequent , usually at Spurn or Wintersett , but always picked up from a precise point at which any conversation had ended previously.  Such was the case for many years until I moved back to Barnsley around a couple of years ago.  Previous to then I'd had a long chat with David,whilst at Spurn, about my moving back to Yorkshire from Islay and he was heavily persuasive in his case that I could do no better than choose "the old area". He was right, of course , and his enthusiasm won through !

Milestones stand out :  being introduced to Wath Ings, watching Nightjars at Dovecliff, seawatching at Spurn and much , much more.  Whilst recent years have not provided the opportunities for contact that they might have done due to work, living away , family matters and so on, what has carried over from those early halcyon days is the sheer joy and enthusiasm that David simply poured out when birds and other wildlife were the focus of attention and that nobody else could avoid embracing. I suspect many of us were natural converts and have, ourselves, benefited.

Like Yorkshire tea and Tetleys beer surely David must also qualify as one of Yorkshire's Finest
Posted by John S. Armitage at 10:55 AM No comments:
Email ThisBlogThis!Share to TwitterShare to FacebookShare to Pinterest
Newer Posts Older Posts Home
Subscribe to: Posts (Atom)