Yesterday was the routine monthly outing of the Huddersfield and Halifax RSPB MG. Despite the weather being grey and penetratingly cold at the onset,  the day improved with bright sunshine throughout, although without any discernible improvement to temperatures.  First stop was Scalby Mills at Scarborough which, unfortunately , was somewhat devoid of birds as the high tide, backed by a brisk easterly wind, had over-topped the rocks offshore and continued to sweep into otherwise sheltered areas immediately off the coast.. A few Wigeon were present, a Rock Pipit flew past as did a Shelduck offshore and a Grey Wagtail was present among the rocks of the nearby stream.

As a consequence we moved on to check Scarborough Harbour which in recent winters has played host to some good birds. Our thinking was , with easterly winds , something would surely have sought refuge within the harbour. Well, our thinking was seriously flawed as, other than a few Turnstone, precious little was in evidence with even gulls being in short supply. It was interesting to see the numbers of people out and about and note the beefburger, fish and chips, cockles or similar and ice cream vendors now appear to work to a twelve month season !

On to an area immediately south of Scarborough, where we overlooked the coast from the car park. Red-throated Diver,  a pair of Goosander which then moved north, a couple of Mediterranean Gulls improved the day as did a very showy Roe Deer. We then moved on to our major venue for the rest of the day, Filey Brig. A little windswept and bracing it might be said, but the day was still bright and a pleasure nonetheless.  A few Gannets were offshore as was a distant raft of auks which were probably all Guillemots if the occasional single bird we identified was an indication.  A couple of Eider, Fulmar, a small group of Purple Sandpiper, a party of Redshank , a large feeding group of Oystercatcher in the car park area, several Cormorants and a Shag improved our day list.  In recent times reports of a Velvet Scoter being present were circulated. Despite an appreciable amount of time being spent searching the only bird we found was a single Common Scoter which, nonetheless was new.

So, an extremely enjoyable day in typical winter weather that produced some nice birds despite the robust conditions!
Posted by John S. Armitage at 9:51 AM No comments:
Email ThisBlogThis!Share to TwitterShare to FacebookShare to Pinterest

The start of a new begining !

The last two years has seen some major changes in my personal circumstances, e.g. moving from Islay to South Yorkshire,  challenging family incidents which, thankfully, have all resolved themselves satisfactorily and  now a series of utterly frustrating events at the beginning of this year that have moved beyond the simple description of "unfortunate"!


Setting aside a bad fall on ice, a less than comfortable journey back home from Scotland and surviving, along with everyone else, a less than clement period of weather thereafter, the main problem was yet to occur. Can you conceive of a set of circumstances where you have two absolutely serviceable laptops that then abruptly cease to function within the same ten days.!!  Desolation followed and a growing realisation of how completely dependent we are on technology nowadays!  Leaving the boring details to one side , a new machine has been bought and I'm gradually becoming acquainted with Window 10 ( tell me it does happen, eventually ! ).


In between times I've managed a period down in Norfolk and trips off here and there but, of course, have not been able to put out Blogs about the visits or indulge in any ranting about conservation issues!  No comments please !  After 2017 this year was meant to be the absolute perfect launch into what might now be considered "retirement". The first six weeks have been a bit mixed but things are now hopefully under control!  I've set up Patchwork Challenge, BirdTrack , Bubo, Bird Journal and got this facility under way again, so it's wall to wall birding from now on......an utterly apt lifestyle for a 76 year old, don't you think? I'm away to the Solway shortly and have a continuous flow of similar "expeditions" in hand. Can't wait!


Finally, this is a shot I got of a male American Wigeon at Clachnaharry Loch, Inverness in early January which has returned for a second winter. 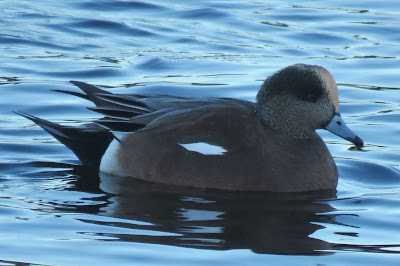 Posted by John S. Armitage at 10:09 AM No comments:
Email ThisBlogThis!Share to TwitterShare to FacebookShare to Pinterest
Newer Posts Older Posts Home
Subscribe to: Posts (Atom)