Some afterthoughts relating to Spurn and visitors.

I've been pondering on a problem for several days which has caused me genuine concern!  Setting aside the current debate and details relating to the planning application and the proposed Visitor Centre at Kilnsea, Spurn,  I believe there are some straightforward problems against which there has been insufficient consideration. Indeed, even with a lot of consideration, I suspect no solution would be forthcoming because of the predictive aspects of the situation. This begs the question of whether firm proposals ought to proceed at all or whether a precautionary principle ought to apply. 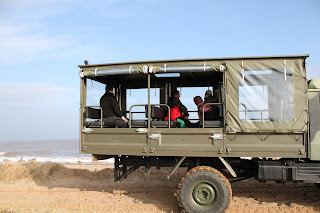 I think it's a given that , at some point , another inundation event will occur and cause an extension of the breach channel additional to the erosion which successive high tides might also cause throughout any calendar year.  The above picture of the Unimog demonstrates the means by which visitors to Spurn will be transported across the breach and down the peninsula to see the renovated lighthouse and the actual Point itself.  This vehicle has been stuck already on several occasions.  The point above made about the breach extension and ,over time, the ever increasing churned up substrate that undoubtedly will become saturated at certain times, is a worry.  This latter aspect and the extent to which actual damage might be caused is something of which the YWT will no doubt be acutely aware and almost certainly need to take action on as the months and years go by.  I've a vision of areas either side of the breach looking more like a major building site than a National Nature Reserve, but there you go!!  No doubt Natural England ( who actually funded the vehicle ! ) will monitor the situation and the newly formed "Access Group" ( RSPB, Natural England and YWT ) similarly will have the matter under constant review.  A situation might even be envisaged when the YWT needed to suspend the visits with a consequent loss of income and angst for lighthouse enthusiasts, even to the point of them being permanently cancelled.

But all that pales into insignificance in my view coupled, in parallel, with what happens to the day visitors. With little to do other than browse the exhibitions and have a cup of tea at the Centre, those in attendance will not be reduced in number by a proportion then going down the peninsula, but all will be concentrated within a given number of footpaths radiating from the Centre itself.  Increased presence in this overall area will no doubt lead to a lessening of its use by wildlife, particularly birds, due to permanent disturbance and erode the very objective that the Trust is pledged to encourage, namely enhancing peoples' experience and knowledge of wildlife.

Whilst I realise there's possibly an element of pessimism associated with the above remarks,  to actually ignore the possibility is equally remiss too. Similarly, whilst I suspect the Access Group will monitor usage of the footpath network and any associated pressure and damage, what happens in the event of it being concluded that visitor pressure IS causing a problem. With a fixed geographical resource where do you put them or send them ?  Not an easy problem to resolve !  This is one of the reasons I've been in favour of a "Gateway Centre" located at Kilnsea Wetlands simply because it provides a greater variety of activities/footpaths and dissipates the potential problem arising from a concentration of visitors in a honey pot situation.  Time will tell, but not at the expense of Spurn I hope!
Posted by John S. Armitage at 10:31 AM
Email ThisBlogThis!Share to TwitterShare to FacebookShare to Pinterest
Newer Posts Older Posts Home
Subscribe to: Posts (Atom)