Nowadays, given the number of sites I cover, it can take me three separate days to visit all of them to complete the monthly BTO WeBS counts ( waterfowl counts ). This planning can be frustrated by weather conditions, particularly as far as Outer Loch Indaal is concerned. The "outer" part of this  large sea loch can so easily be adversely affected by sea conditions and even sunny weather!!  Two days ago , it was glorious weather, warm and sunny, but the sun-dappled sea and reflected light made it impossible to see much at all! By contrast today was perfect......grey, calm and good light conditions.

My interest at this time of year is heightened not just by the fact that our wintering duck numbers are arriving, but that numbers of Great Northern Divers begin to increase too, sometimes quite significantly. Yesterday was no exception with at least thirty seven (37)  in the outer loch, including one group of seventeen ( 17). Most are present in loose groups of three or four, some are single birds, but the occasional large group occurs too. Surprisingly, on a large extent of water, they can be easily overlooked and a need to exhaustively scan each sector is necessary. This is the best time to try and get a good count of birds either returning to winter or using the loch in transit. Undoubtedly some birds move off elsewhere and, as the winter moves on, birds remaining become more dispersed as they seek for food. Mixed age parties are regular at this time of year, with some adult birds still in resplendent summer plumage, but with immature birds present too, suggesting such groups travel together. Whilst seawatching provides ample experiences of single birds, duos or trios flying through on particular days, suggesting birds possibly congregate immediately on first arriving, their presence at this time of year is a salutary reminder that winter is around the corner and that we will now be playing host to this magnificent species until next Spring. 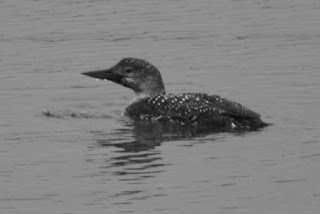 Other species present were Common Scoter (110 ), all of which were disturbed by a boat and showed no birds with white wing panels (!) and also that the majority of which were male birds too, Northern Eiders (30), several Red-throated Divers, Razorbill and Black Guillemot. The next task is to cover Inner Loch Indaal, which is generally much more sheltered anyway, carries a wider variety of species, in higher numbers, as well as more of the species already recorded. Altogether, good birding!

Later, whilst checking some small lochs I also went through a mixed flock of geese ( Barnacle, Greenland White-fronted, and Grey-lag ) and came across one of the Lesser Canada Geese which are around at present. Despite it being previous to the end of October, geese are already moving around the island more, away from their initial  "gathering grounds" at Loch Gruinart. The groups of Whooper Swans which stayed a short while, and conveniently fed on barley stubbles, appear now to have moved off.  October is by far the best month to see numbers of these birds moving through Islay, sometimes never even making a stop as they fly onwards to their wintering grounds in Ireland. Sometimes a particular October day can be magically enhanced by the arrival of several large groups of Whoopers arriving  at Loch Gorm in NW Islay within a given "time window", suggesting they left Iceland around the same time. After resting, preening and a little feeding , all accompanied by their wonderful quiet bugling notes, they can begin to leave in successive skeins. The calls increase in volume as if encouragement and  excitement passes down the line and they head off with unerring accuracy toward Ireland, sometimes visible in the far distance, sometimes not!  A great sight in any autumn!  From now on we might also "receive" the arrival of odd family groups of Whooper Swans, as they can sometimes arrive a little later than the main passage of birds and then remain with us on some favourite loch over the entire winter.
Posted by John S. Armitage at 10:14 AM
Email ThisBlogThis!Share to TwitterShare to FacebookShare to Pinterest