I spent Tuesday afternoon watching the evidence session associated with the E-petition calling for the banning of driven grouse shooting and found the whole process fascinating, but not necessarily wholly acceptable. Skipping ahead a little, the event precedes the MP's debate on the subject which will take place in Westminster Hall at 1630 hours on 31st October.  Without recourse to a very long Blog I think the best approach to take is to make available at the end of this entry the link to the Petitions Committee website where the written evidence submitted can be examined, the summarized proceedings and other aspects of direct relevance scrutinized and the actual proceedings watched through again.  There is an absolute plethora of material which can be looked at !!  The process stems , of course, from the E-petition raised by Mark Avery that secured over 100,000 signatures and, therefore, qualified for a Government debate on the subject, a matter which has been granted by the E-petitions Committee of which the evidence session and the debate are an essential part.

Taking part on Tuesday were Dr. Mark Avery, originator of the petition,   Geoff Knott (RSPB), who provided supplementary information linked to many aspects put forward by Mark Avery, but who was there primarily to provide an alternative solution to an outright ban in the form of a licencing system. Providing a completely alternative and opposing view to these opinions was Amanda Anderson  ( Moorland Association) and Liam Stokes, a representative for the Countryside Alliance.

The proceedings fell in to two distinct parts with questions being put from members of  the Petitions Committee and EFRA. In all the proceedings lasted two hours so there was a fairly exhaustive examination of aspects linked to the general subject, although the relevancy of some of these could be questioned!  As I've said before I am a steadfast advocate of our democratic system, which is not always perfect and, indeed , such proved to be the case on this occasion. As outlined the overall session fell into two distinct parts with the second element linked to the "opposition statements" being far more informal than the more intensive atmosphere of the first where an outright ban or a licencing system was advocated. This was sufficiently obvious as to be disappointing, although the points raised by Mark Avery and Geoff Knott were well made and, of course, go down on the official record.

One can't be other than critical of some of the claims made by Amanda Andersen in particular.  Seeing Hen Harriers from one's kitchen window every day is no indication of the health of the population elsewhere ! After living in the wilds on the Isle of Islay, until recently, such experiences were commonplace, but provide no contradiction to the fact that, over the last decade in particular, persecution of this and other raptor species has been taking place on grouse moors quite deliberately and routinely such that the breeding population in England of Hen Harriers is now bordering on extinction ( 3 pairs only in 2016 ). One might also have been led to believe that the salvation to all ills in the uplands is being or has the potential to be solved by the presence of grouse shooting enterprises. The romantic drivel offered relating to Littondale might almost persuade one that a new radio programme is hovering in the wings  (  " Littondale..........an everyday story of upland folk " )  and that it might even be a contender to displace that national treasure ," The Archers" ! 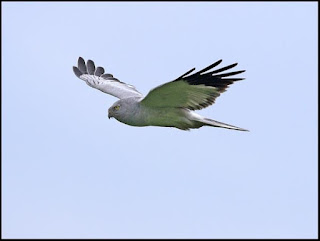 We heard that, collectively, grouse moor owners are investing a million pounds per week of their own money to improve these areas, be it by blocking up drains which might exacerbate  "run off ", or via intensive re-vegetation projects aimed at improving the stability and water retaining properties of the peat.  No recognition was given to the sums of money which has also been forthcoming from the public purse for similar enterprises. As might have been foreseen the answers to many of the problems outlined by Avery and Knott was, more time, more money, more research and, of course, a more than adequate time period to elapse to allow the ill fated Government  Hen Harrier Action Plan to be allowed to prove its worth ( or not as the case might be ! ).  Long grass seemed to be sprouting up everywhere providing a more than apt background to the repeated blandishments on offer.  But at least there was a couple of admissions and acceptances relating to raptor persecution, namely that there was, and had been an issue, and that the killing must stop.

But what of the equivalent questions equal to the quasi-accusation put to Mark Avery that he should have a costed proposal linked to his future vision of the uplands!  It was all so very cosy with no intensive questioning aimed at the justification of the ever increasing intensification of grouse shooting  or the inexorable repetition,  year on year, of raptor persecution and what should be done about it.

The end result , of course, was that no clear cut way forward emerged and, therefore, the overall conclusion of what steps might arise stemming from the debate on the 31st will be more than interesting to say the least. There are some very real problems to address and these must be pursued relentlessly as it was quite clear the shooting fraternity are quite happy to take cover in the long grass and sit things out !!

I'd encourage anyone who is interested in this topic to access the  link below and read what is on offer and then to watch the debate on the 31st, of which I'm told a video record will be available.  Whilst democracy might not be perfect, there is a genuine effort to make its workings available to all nowadays and I believe we should both support and avail ourselves of the output.

Petitions Committee   E-petition to ban driven grouse shooting.
Within this site there are various links to different elements of the process, the proceedings and the evidence submitted.

Posted by John S. Armitage at 1:09 PM
Email ThisBlogThis!Share to TwitterShare to FacebookShare to Pinterest