Whilst I suspect I might look like some "hominid land crab" when on the move at least things are relatively back to normal, albeit at crawler pace!

And I now have a new weapon in my ornithological armoury. I've purchased one of the radios used by "Spurn regulars" which allows everyone to keep in touch and , hopefully, not miss too much. Thanks to Paul Collins ( Warden, Spurn Bird Observatory )  and to the supplier in Hull for the support. 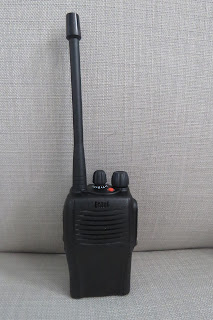 Being the absolute non-techie I didn't fiddle with it when it arrived and therefore received a rather old fashioned look when I called in at the Obs. and enquired as to the next stage. A knob was dutifully turned to "ON"  ( how embarassing )  and the unit handed back .... and , there you are, operational. There are those of acquaintance who will forsee endless disasters emerging from now on ranging from incomplete reportage, and variations on a theme, but I've realised benefits already and heaven knows how useful it will be in OCTOBER !!!!!

On to a careful stroll along the Canal Zone , although little was present , except a southward moving Common Buzzard ( picked up through a report of the bird over Kilnsea on THE radio. Goal in one I thought ! )
Kilnsea Wetlands area for most of the afternoon didn't deliver anything beyond what I'd had before but was extremely rewarding in terms of views of a variety of species.
Posted by John S. Armitage at 5:54 PM
Email ThisBlogThis!Share to TwitterShare to FacebookShare to Pinterest