Within the last few days the news has emerged that three male Hen Harriers have disappeared in the Forest of Bowland, Lancashire. All were associated with active nests on land owned by United Utilities, who support the work of the RSPB, which  has a staff presence on the company's Estate. Other sources report that, earlier in the season, birds arriving on other private estates within the Bowland massif  disappeared similarly.

Now let's set aside the weak sentiments and ill-disguised accusations of yesteryear and firmly point the finger at those responsible for the deliberate annihilation of these birds. There are clearly those amidst some of the private upland shooting estates,  a minority or otherwise, who are responsible for such persecution. Remember too that two birds "disappeared" in 2014 from the self same area. Forget food shortages, poor Spring weather and the plethora of excuses which have been offered on occasions in similar circumstances and acknowledge that these birds have been taken out deliberately by those who, with their continued accompanying slaughter of their managed quarry species, Red Grouse, can aptly be named  "The Pleasure Killers". 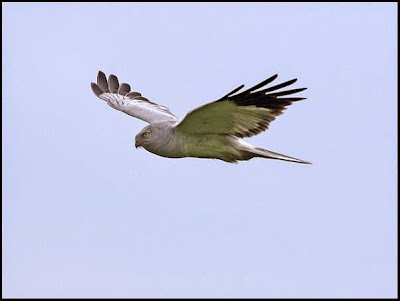 As I spent twenty years ( 1980-1999) overseeing the protection of Hen Harriers in Bowland the news saddens me enormously.  It is now 35 years since beginning that task and still no "lasting peace" is in place, indeed the national situation is worse than at that time.  The overall British population of Hen Harriers has been decimated within the last decade or so and the English population, of which Bowland's birds are a significant part, has almost been eliminated.

Since January 2012, when I altered the name of this Blog, I have written well over thirty entries relating to this problem. There is one piece in particular that I would very much like people to read  (please!).

That is almost three years ago to the day and summarizes the circumstances which prevailed in the 1980's and 1990's.  The current situation is absolute lunacy, has changed for the worse and demands that tolerance be set aside and a full scale assault  mounted on the problem.  The RSPB has secured significant funding for such work, a part of which I am sure will have been harnessed already to good effect. But is that enough? A duplication of past initiatives involving dressing up as Hen Harriers at country fairs and education visits should be set aside and a more focussed approach announced. As I've maintained on previous occasions this conflict is not just about curbing the activities of the "Pleasure Killers", this is a conflict with the Establishment within whose ranks the majority of grouse moor ownership rests.  There is no doubt in my mind that they view the presence of harriers and their  (overstated ?) depredations on grouse stocks as something they have no intention of tolerating. Compare the situation in the hey day of such Estates and the absence, then, of SSSI designations, access provisions, National Parks and wildlife legislation.  They feel squeezed within their own definition of personal independence and are reacting against what they see as impositions upon their "rights".  Maybe all this is not expressed publicly, but I'm damned sure that it's the position they're coming from.  Remember too, whilst employer estate owners might deny such, they are fully aware of such persecution through media reports  and do have the option of instructing directly their staff that any such activities do not occur as part of their duties.  This is part of the Vicarious Liability debate and provision, but how many moorland owners have we seen endorse such as sensible and condemn the continuation of raptor persecution.  Sorry, chaps, but your silence says it all in my book.

So, conservation organizations, what to do?   Well, get a bit street wise to begin with. This is not the subject of a debate within a Students' Union occasion , it's for real and will determine whether you're labelled in the future as having  "lost " Hen Harriers or not.   There is an almost immediate need to throw down the gauntlet ( Enough is really enough. ), publicise the intention and  then throw all resources available into the fray. I can, however, see why it's sensible to wait until after the election.  Incidentally, this shouldn't be via some limp-wristed statement calling for people to co-operate, but the announcement of a firm intention to locate , prosecute any miscreants and name and shame any specific areas where incidents occur. Play the long game and start "inserting people" into the appropriate local communities and shooting activities. It's time to throw out the Queensbury Rules and bone up a bit!  It has to be followed through and success obtained. The Investigations Section within RSPB does a tremendous job, if this means strengthening their ranks even further, then do it.   This is the sort of practical campaigning action  the membership expects , so tell them about it and not by some oblique reference, but in permitted detail. And if all this means suggesting to keepers and other contacts what I used to offer in the past that, if they chose to follow their own illegal route, then I'd enjoy smiling at them across the Court if ever we got to that situation. Do it and mean it!!

The above represents a difference between desire ( banning grouse shooting,  licencing shooting estates ) and immediate active intention. It's what people expect to see and if it extends into the need to set up a fighting fund, supported by members and others, then I genuinely don't feel people would refuse to come forward. But first, some results!!

In passing I've been asked why male birds can be singled out and deliberately targeted. When male harriers provision their female, ( who is busy incubating eggs or brooding young) , they tend out of habit to fly away from the nest on prescribed routes. Such is not a mystery, other birds do it too, for example , Red-throated Divers when leaving their lochans to go out to their feeding grounds at sea.  So anticipating where birds might be intercepted is not a difficult problem!!  The Pleasure Killers clearly know about it.  Think about it.    The declared intention of RSPB to put nests under direct protection where necessary almost dictates action by these people  is required elsewhere in order to avoid detection. Not a difficult thing to work out or even respond to!!

Again, in passing, may I leave a final thought for moorland owners ( although I doubt any read this Blog ).  Whilst working for RSPB in the 80's I was approached by an anonymous group who offered to set fire to a particular grouse moor if we felt it was necessary. I honestly don't know who these people were and adamantly refused their "help" as I've always maintained it's necessary to be squeaky clean!!  However, I make the point that there are people who feel like that and with the current , unresolved conflict, such as it is, there might be those who would be prepared to turn to such high-handed solutions.  I'd be utterly against such action, however desperate circumstances become. We don't want unilateral action. Such provides the strength to our own arguments against persecution at the present time. Let's not shoot ourselves in the foot, ( a metaphor which I'm sure even our most entrenched opponents will understand!!! ).

Posted by John S. Armitage at 8:07 PM
Email ThisBlogThis!Share to TwitterShare to FacebookShare to Pinterest