Good news of the California Condor.

A statement from the US Fish and Wildlife Service on Monday gave very encouraging news about the California Condor. Last year more young birds were hatched and fledged in the wild (14 )  than adult birds which died (12 ).  Whilst the margin may have been small it's most certainly a welcome indication of success.

In 2015 there was a total of 27 condor nests in the wild  and the current population is held to be 268 birds in the wild and 167 in captivity.  This has been a very dedicated "act of faith" as it must be remembered that, at one time, all surviving birds were in captivity. The nesting birds now range from California (19 ), the Arizona-Utah border (3) and Mexico's Baja Peninsula (5).  Nests are present in several national parks, including the Grand canyon, which undoubtedly helps to promote the cause given the high level of visitors. 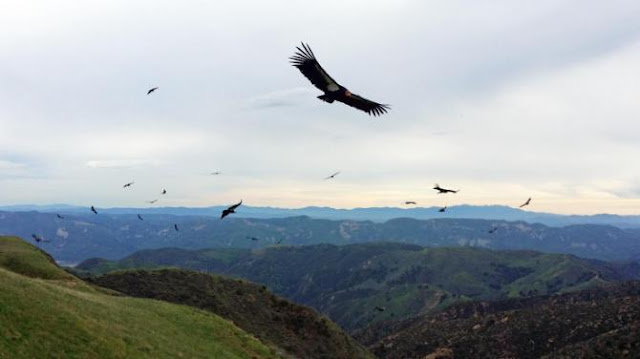 By courtesy of the US Fish and Wildlife Service.

Around 20-40 of the captive bred birds are released into the wild each year.  Here more than 20 can be seen soaring over Tom's Canyon, Hopper Mountains National Wildlife Refuge, near Filimore in Southern California. Following release birds can expect to live for 60 years.   Despite birds having federal protection under the Endangered Species Act ( 1973 ) this highly successful scheme is faced with negative factors that work against the overall success of the programme.  There is still a problem with lead poisoning and two of the twelve deaths which occurred last year could be put down to this cause.   The lead is picked up when birds eat bullet fragments from within animals which have been shot with lead bullets. Why such animals are shot and then simply left in the wild is not commented on , but it's a sad reflection that such success with this iconic species is then undermined by what one imagines are indiscriminate activities !

Congratulations to the US Fish and Wildlife Service !!
Posted by John S. Armitage at 10:35 AM
Email ThisBlogThis!Share to TwitterShare to FacebookShare to Pinterest
Newer Post Older Post Home