The Barnacle Geese that everyone forgot !

Given that I shall be leaving Islay shortly I've reached a stage of reflecting on various things which have happened, of lost opportunities and issues which still remain.  One of the burning issues on which little progress has been made is a proper resolution of the conflict between farmers and geese. The solution at present, based on Scottish Government policy, is to kill a proportion of the Barnacle Geese which find refuge here at the moment, reduce, and then maintain, that population at a level of around 28,000 birds. In the meantime subsidies to farmers are still being paid out, income still flows into the island from birdwatcher tourists and you eventually get an impression that this is damn all to with conservation or agriculture per se but is simply a question of........ money !  The Government attempts to reduce its subsidy budget, the farmers clamour for subsidies to remain at previous levels despite goose numbers being reduced and our international conservation responsibilities are thrown out of the window.  Cynical? You bet, but read on!

As these Blogs are basically written for birders let me pose you all a question.  How many Barnacle Geese have been shot on Islay in the last three years.?   5235....were you close?   It also looks as if this years bag limit of 2160 is going to be met which will take this  figure to 7395.

Now all of this stems from deliberate policy from the Scottish Government  then enacted via Scottish Natural Heritage, the details of which can be read in the following document. 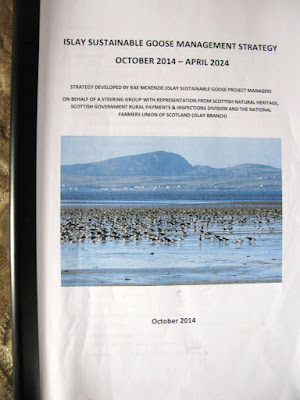 
Now, whilst you might think this is a lost cause, the matter is being fought against by the RSPB and the WWT.  An example of what goes on behind closed doors despite not receiving the profile it should. In the absence of any other meaningful opposition other than a few mutterings behind closed doors the above organizations have registered a complaint with the European Union, full details of which I'll present below courtesy of RSPB.   Now I need to ask for your support, indulgence, full attention and cussed determination as this might best be described as full on formal conservation stuff !!!!  At least skim read it even if you can't last to the end, but , if you do, I think you'll get an insight into what really motivates different sectors of our population ( MONEY ) with conservation being relegated way down the league table. Oh , there'll be " utterings and splutterings " at that remark but, nonetheless, the start point appears to be finding a way around a conservation problem as opposed to embracing a solution on its behalf.  And it usually involves killing. No ! then read some of the suggestions that have come up elsewhere relating to Beavers, Wild Boar, and Muntjac when they are part of perceived problems.

So here is the complaint document submitted to the EU by RSPB and WWT.      Well done!!


Still with us?   Congratulations and I suspect there are aspects outlined in the complaint that you never guessed were or could be associated with conservation!!   Now this is a layman's view of the current subject and I make no excuses for that. This subject has gone quiet, very quiet and, in the meantime, geese continue to be shot. I've never felt that a solution to this problem should be, or could be, shooting and I've never felt convinced by the ever upward revision of costs arguments that are put forward by the farming fraternity.  The real problem is , "What should be done".    I'm afraid, with Brexit raising its head, the possibility of a UK exit might bring about this complaint being kicked into the long grass. But what of possible Scottish Independence, EU membership and the like?.  A newly recruited member state ( and how long will that take ? ) would doubtless be welcomed with open arms and little done at the onset to criticise that member's position on a matter like this.  So, is this issue dead in the water ? Why should it be? That is down to us and continuing sustained pressure on EU representatives, polite letters of enquiry to appropriate Ministers asking for an update on progress might help too. The real task is keeping the matter alive......and the geese too. 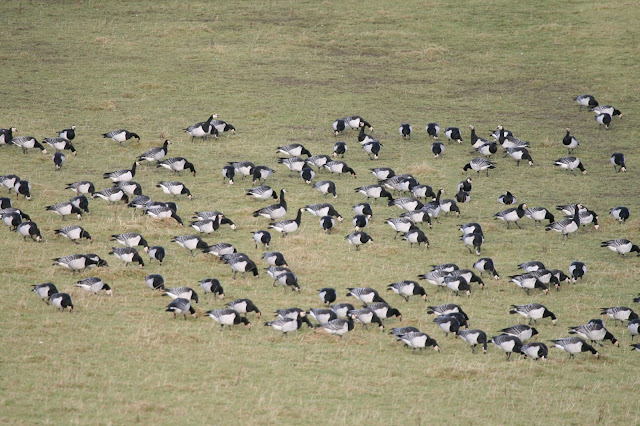