Last week, whilst in the Cairngorms, I had an afternoon out on the Black Isle prior to meeting daughters two and three ( Rachael and Katherine ) in Inverness.  I went to an old favourite location, Chanonry Point, both in the hope of seeing a few birds and also the Bottle-nosed Dolphins.

I wasn't disappointed, in fact I was pleasantly surprised all round!  Even in these times of austerity the site has undergone a face-lift, even possibly a bit beyond necessity. 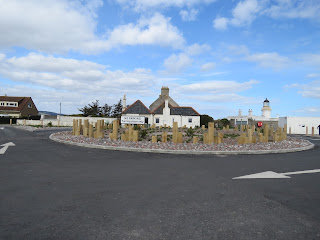 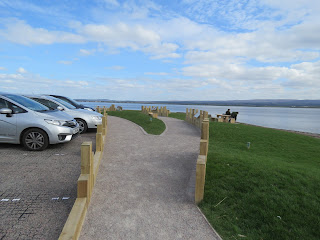 The entrance is formalised, with clear signs, and has an upbeat look which I found perhaps a tad unnecessary but appealing all the same.  The walk to the Point is now paved and has modern ramparts. Parking spaces are set out and all is rather proper it has to be said!

There's a very good interpretative sign and even a further observation area around the corner. 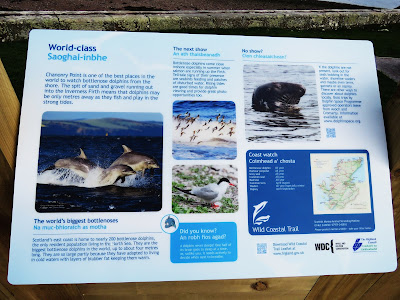 Click on the image to enlarge and read the information. 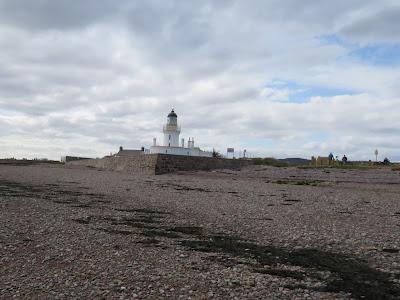 The separate observation area can just be seen off to the right. All mod cons !

It was encouraging to see so many people there, even on a Tuesday afternoon !  Camera clout was much in evidence and I hate to think of the accumulated value that was being brandished about . But, whilst previously, many attendees had probably known diddly squat about dolphins , here they were and clearly enjoying the process. As a tourist location it's obviously now very well embedded in the "must have" location list and I guess late summer will see full attendances and no car park spaces available  Boat tours are available from Avoch village I'm told and clearly many supporters are on-side as far as marine life is concerned and that can only be good.  Well done Local Authority ....

The afternoon was hard work at the beginning I have to admit with no "swim pasts", aerial contortions and the like. And then, amidst cheers, a Bottle-nosed Dolphin began to feed just offshore. I was caught up in it all ( daft old bugger ! ) but I have to admit I enjoyed it immensely and that's what its all about, isn't it? 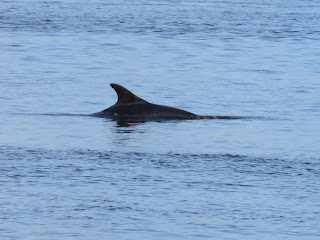