News that the coastal road closure had been lifted coupled with the fact that the high tide at Titchwell was predicted to be around 1030 hours prompted a rapid change of plan.Whilst I got there early the opportunity had been espied by many other people too as the car park was filling quite quickly.

There was still enough time to make a leisurely examination of all areas alongside the footpath to the beach. Almost in a replay of previously the ditch near the Visitor Centre produced a nice surprise in the form of a Water Rail feeding out in the open in an entirely unconcerned way. The usual array of duck species was on the main lagoon together with a nice group of Avocet.  Finally I reached the coast and chose a quieter spot to the west away from the gathering at the very end of the path !. 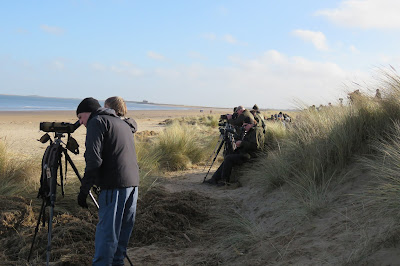 Now to a mere observer of the seascape there were few indicators of the delights that lay beyond ! 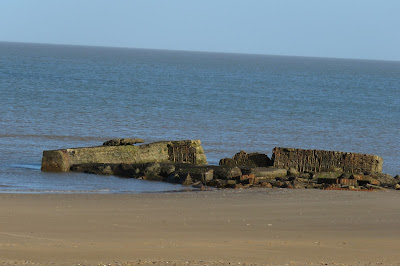 A telescope scan showed duck to be everywhere. In addition to the large raft of Common Scoter other parties were scattered around,  many with accompanying Velvet Scoters which were easily segregated, Goldeneye, Red-breasted Merganser and, best of all, a seeming profusion of Long-tailed Duck were all obvious. I've never seen so many Long-tails off Titchwell, or of Velvet Scoter either.  I eventually found a single Slavonian Grebe amongst several Great crested Grebe dotted about and, then, quite fortuitously, came across a Red-necked Grebe which promptly dived and couldn't be found again. I'm not into counting fleeting views for year lists, but confess to a frantic casting around trying to locate the bird again, which I didn't !!

Odd Red-throated Diver appeared at distance and a single Razorbill, so there was much to search for. It was great, and so was the weather too. A slow return along the path produced nothing new compared to the day I'd spent here previously other than Brambling and Siskin visiting the feeders so it was time to move on. Choseley Barns was a disappointment with nothing there other than a few Woodpigeon  and a great mound of earth which blocks the view across much of the large adjacent field. Yet another deliberate intervention ?

On to Thornham and an exploration of the eastern end of the Thornham/Holme area. There was little to be seen so I travelled around and came into the NWT Holme Reserve just on the off chance of the Ferruginous Duck having returned  ( it hadn't ). Obviously the surfeit of riches from the morning wasn't going to be replicated ! Time was moving on so I thought I'd take a tilt at Golden Pheasant at Wolferton. I was there in good time, secured "the lay by spot" and waited.  At 1730 hours I finally conceded with a tally of a Grey Squirrel, 3 Muntjac and 2 Fallow Deer ! The day had obviously closed down ! It had been a good week nonetheless, so no grumbles, and there was still time for a roast dinner and a pint of Ghost Ship before thinking of the return journey tomorrow and the delights of the Five Nations Rugby.
Posted by John S. Armitage at 3:57 PM
Email ThisBlogThis!Share to TwitterShare to FacebookShare to Pinterest