Potteric Carr Nature Reserve lies on the SW outskirts of Doncaster, South Yorkshire and is a mosaic of open water areas, grazing fields and woodland. It is administered nowadays by the Yorkshire Wildlife Trust but was initially the brainchild of a Doncaster resident who gradually brought together the 600 acres or so that comprises the reserve and managed it via an army of local volunteers.

It was a real pleasure on Tuesday to visit the reserve, to have a wander around and to swap reminiscences with the man who brought it all about, Roger Mitchell.  But the story is a little more convoluted than that ( aren't they always ! ).  I first met Roger in the early 1970's I guess when he brought together a "South Yorkshire Conservation Group". He was much involved with the County Wildlife Trust and this group acted out a watchdog role as far as planning proposals that might affect wildlife sites and interests.  We then worked together when, essentially, he was my boss within the newly formed South Yorkshire County  Environment Department within the Metropolitan County system which had come into being in 1974. Those were exciting years that, in many respects, saw conservation and environmental matters come of age and begin to achieve more recognition than previously. I eventually left in 1979 to join the RSPB.

During that period Roger effectively ran two jobs. The day job and the Potteric Carr job !!  His was a crystal clear vision of what he wanted to achieve and the potential that he saw associated with the reserve. His enthusiasm and drive never diminished and Potteric in some inevitable way found its way into many conversations such that we, as staff, often used to mutter amongst ourselves , " He's on about Potteric, again"!   But that is the real stuff of dreams and the substance of dreams realised. 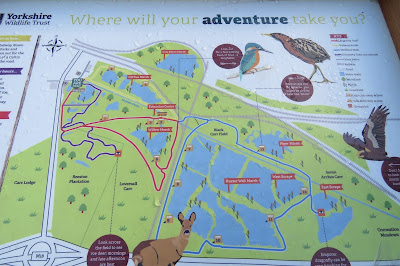 The reserve nowadays is a tremendous place. Its species list is extensive and breeding species have included Bittern, Little Bittern and Black-necked Grebe. The pathway network is extensive and you need a good, full day to do the place justice. And remember, this is a reserve on the outskirts of a major town surrounded by road and rail networks, a veritable jewel and sanctuary of tranquility amidst the hubbub of modern day activities. 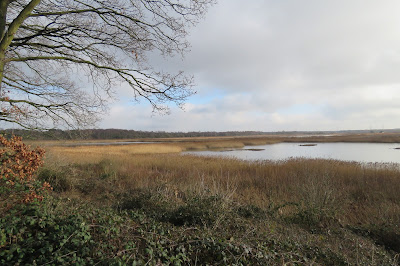 Given it's around twenty five years ago since we'd last met there was much to talk about.  I asked Roger when he'd first visited the site. " Oh, when I was about fourteen I suppose ". No doubt he and his cohorts had crossed a few active railway lines in the process to reach what was then colloquially referred to as  "the swamps".   But a vision of what the area might become emerged and a lifetime's efforts made available to achieve those ends resulting in what can be seen today.  Impressive stuff!  Well done, Roger ! 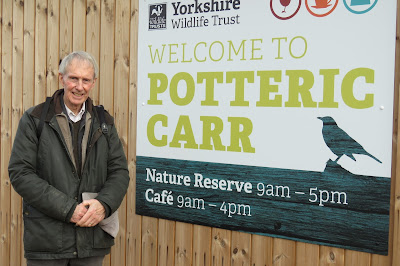 And here's Roger standing next to the new Visitor Centre which the YWT have recently erected along with new car parking facilities. It's a great testament to what can be achieved through dedication, an ability to address the multifarious challenges that emerge with such projects and to absorb some of the  disappointments too. And I can recommend the roast pork and stuffing bread cake ( served with chips , of course, this IS Yorkshire after all ) and from past experience the bacon butty. So make space in your diary for a visit and marvel at what has been achieved!
Posted by John S. Armitage at 5:00 PM
Email ThisBlogThis!Share to TwitterShare to FacebookShare to Pinterest