Further revelations expected from our Cuckoos!

Returning to Islay on Wednesday I travelled northwards up Loch Lomondside in tremendous weather. The sunlight reflected off the trees alongside the loch, the waters had a wonderful dappled effect and the far hills carried a slight haze in the developing heat. As I turned on to the A83 at Tarbert little did I know that, off to my right around Loch Katrine,  there were two Cuckoos carrying satellite tags that, soon, would be making their own long journeys to their wintering "homes"  in Africa.

You may remember that in 2011 the British Trust for Ornithology caught five Cuckoos in East Anglia and fitted them with satellite tags. Sadly, only two of these birds have returned to the UK this year but, in between, they have all provided unique information on their migratory routes, stopover areas and their wintering locations deep in the Congo Rainforest. One bird travelled through Europe via Spain , another via Italy, aspects that would have been laced with pure conjecture had the ability to follow the birds not been available.

This year has seen a further ambitious twist applied to the research. In addition to two more birds being "tagged" in East Anglia, four have also been caught in Wales and five in Scotland. These eleven birds are now hopefully poised to provide even more exciting new information and data in the ensuing months. Over recent years the English Cuckoo population has reduced by 51%, that of the Welsh population by 27% , but, thankfully, here in Scotland the numbers appear not to have suffered as drastically with only a 9% reduction being noted. Following the initial success in 2011 a series of inevitable questions about whether any differences applied between these populations as far as routes, wintering areas , timing of their migration were raised and a decision taken to catch birds in each of the countries concerned. Fascinating stuff, but I guess the reality of catching a sufficient sample is perhaps not the easiest job in the world!  The fact that eleven new birds are now wearing sat tags is a fitting tribute to the perseverance and skill of those involved!! 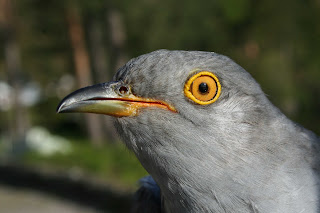 
Two of the Scottish birds were still around as, unsuspectingly, I sped off along the road to my own "wintering quarters". A further two had already moved, one was in North Yorkshire and another was on Terschelling Island in the Netherlands. Since learning of such a relative close encounter my thoughts have turned several times to what might be happening to them all in these early stages. Now comes an even more exciting element in that you can actually follow the fortunes of these birds by logging in to the BTO website (www.bto.org ) and seeing where they are. But my thoughts have not stopped there!  Given adult Cuckoos move off southwards several weeks before their young, a whole new canvas emerges in terms of the circumstances facing these "Home Alone" youngsters. Whilst, currently, they're sitting comfortably, being fed repeatedly by, say, a hapless pair of Meadow Pipits, and resembling some avian advert for the downside of a fast food diet, they too will soon be faced with their own traumatic journey to Africa. "Wired in" they may be in order that they successfully complete the arduous
journey, but do they have any different elements present within that strategy?  A host of questions begin to emerge and the more you become entranced by the possibilities, the more committed you become to  following the species'  fortunes. Perhaps future years will see this aspect being addressed and our knowledge of a bird, which has already figured large within our folklore, increasing even more dramatically.
Posted by John S. Armitage at 9:45 AM
Email ThisBlogThis!Share to TwitterShare to FacebookShare to Pinterest