May I offer my congratulations to George Monbiot of the Guardian newspaper for the excellent entry on his Blog relating to raptor persecution, upland shooting estates, the aristocracy, Richard Benyon (DEFRA ) and much, much more. All the issues that many of us have been banging on about over the past few weeks, ( in fact "repeatedly ranting" on about in my case I have to confess) have now been placed central stage and will reach a much wider audience as a result.
Please read this feature  (George Monbiot's Blog. ).

This may yet be the starting point following which we begin to see change, The volume of criticism against a variety of policies the current Coalition is either imposing on us, or abandoning, as far as the environment is concerned,  is beginning  to gather momentum. Comments are also beginning to arise from within Government ranks suggesting that even informed opinion is questioning the logic behind given positions being taken up. If the Coalition  has any collective political acumen at all, it must surely be obvious that current impatience will inevitably translate into direct action at the next Election.  One of the problems is that it's very difficult to know what the Government does actually stand for in some respects. In what I found to be a very thoughtful piece, Mark Avery explores this aspect in his Blog today ( Bonfires and Beacons ) and the fact that, with Natural England (the Government advisory agency on wildlife matters ) being nowhere to be seen nowadays, DEFRA itself, as its parent Ministry, is being singularly silent on key aspects about which concern is raised. By contrast, however, it's recent inept proposals relating to Buzzard controls, now withdrawn, indicate a preference for measures beneficial to the very fraternity George Monbiot so eloquently condemns and to which the Minister so evidently belongs and defers!!   Errm!   Interesting, digging deeper holes springs to mind!!

Whilst I could have laid out the birds I've been seeing around recently, it seems to me that these issues, and the necessary pressure required to bring about change, is by far the most important matter to address. As it is, there's nothing especial around, although we've always a great selection of species on Islay. It's all too easy to treat them with too much familiarity if you live here. Rest assured that's not the case! Set against routine sea watching,  visits along the Lochs Gruinart and Indaal and other areas , one of the sights that has given me real pleasure over past days is that I've got a Grasshopper Warbler that I can see from the lounge window, admittedly with a telescope. Leisurely viewing both early morning and evening has been a treat!

And finally, after watching, and enjoying, the Diamond Jubilee Concert last evening I spent  time outside the house, simply taking in the delights of a calm end to the day (without midges too ). After living somewhere named Beacon Hill when in South Yorkshire I mused a little on what might be happening there. To my surprise I suddenly noticed a more local contribution to the celebrations! Click on the photograph! 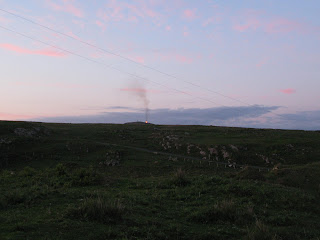 Accompanied by the nearby reeling of Grasshopper Warbler and distant tremulous calls of Curlew, it signified, even in this far flung UK location, an association with some countries and cultures at very, very great distances from here. Indeed, looking westwards beyond the coast about a kilometre away, it was quite easy to  feel a close presence with Canada as a relative "close" neighbour, despite the Atlantic being between us!
Posted by John S. Armitage at 9:19 AM
Email ThisBlogThis!Share to TwitterShare to FacebookShare to Pinterest