A Poisoners Charter in any other guise!


Today, the UK Government has, in effect , turned its back on the whole suite of recommendations.  Rather than set out the various responses and comments from either the Chairman of the Environmental Audit  Committee ( Joan Walley, MP ) or the Government Minister, may I refer you to the Raptor Persecution Scotland website and the excellent and detailed summary of the whole story under

No need to criminalise possession of Carbofuran, reckons UK Govt.

You can also access the actual Government response through a link provided at the end of that article.

To say that I am increasingly unimpressed with  DEFRA's performance is an understatement, indeed that now time honoured phrase, "unfit for purpose " appears to be the most appropriate description one might apply!  An unbelievable litany of failure, be it relating to  Buzzards, bees, raptors, Marine Conservation Zones  and , now, Carbofuran........one wonders how far the list might ultimately reach?  But let's set the rhetoric aside and take a look at Carbofuran.

The first confirmed case of the use of Carbofuran as a poison associated with a wildlife incident was in Fife, Scotland in 1988. It would now seem to be the product of choice for those intending to poison wildlife.  The approval for the use of Carbofuran in any legal form was withdrawn in 2001. It was initially introduced as an agricultural insecticide for use on a variety of crops, but now its supply, storage or use is illegal. In the period 2002-2011 there were 643 bird poisoning incidents and, of those, 49% involved the use of Carbofuran
( see the RSPB BirdCrime Report 2011 ). Leaving aside those details for the moment, the question must be raised as to the availability of the poison and the origin of supplies.  Consensus within informed opinion suggests the substance may be being imported from abroad, including Ireland, or be part of a significant supply which was stockpiled. 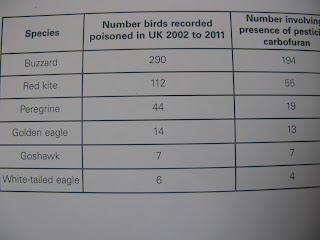 The table above is extracted from the RSPB's BirdCrime Report 2011, see Page 14 ).

The table shows the statistics associated with the poisoning of individual species following the point at which  it was banned in 2001 until 2011.  Simply put, if a substance is banned completely, with no legal usage allowed, then the holding of it indicates an intent to use it for a wholly illegal and premeditated purpose. And yet our " Greenest Government ever" refuses to take an additional preventative step that might just assist the already deplorable situation relating to raptor persecution. It refuses to criminalise the possession of Carbofuran as it maintains there are sufficient provisions under pesticide legislation. And remember this was a step which one of the Parliamentary committees saw as being sensible.

Leaving such argument aside, but in the face of such compelling evidence of the use of this banned substance in recent bird poisoning incidents, it is the lack of commitment exhibited by the Government towards going the extra mile and showing its concern and intent towards improving , potentially, the situation that is disappointing. One really wonders what is the real and honest motivation lying behind this reticence?

Posted by John S. Armitage at 4:32 PM
Email ThisBlogThis!Share to TwitterShare to FacebookShare to Pinterest