A quick "heads up" to promote the latest offering from Lynx. The new Special Volume complements the 16-volume series Handbook of the Birds of the World and deals with new species discovered/described since the final volume of the series and provides a global index too.  It's due in May,2013 and promises to be as inspiring and informative as any of the previous volumes. The offer  price being quoted is 115 Euros up until the 30th April, 2013,  thereafter the price will be 145 Euros. 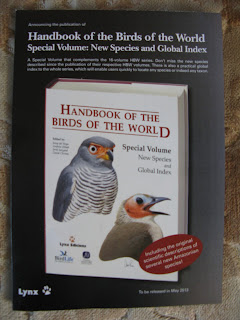 Posted by John S. Armitage at 5:05 PM
Email ThisBlogThis!Share to TwitterShare to FacebookShare to Pinterest