Given the significance of the event I have to say from the onset that, regrettably, I have not managed to see this bird!  This entry is an attempt to provide some background information on the circumstances surrounding the sighting, as opposed to an announcement of the observation, as appears to be the case with other disclosures on Facebook and elsewhere.

At around 0900 hours this morning in central Bowmore, Islay an immature Ascension Frigate Bird was seen and photographed around the harbour by the Sim family. Both the following images are theirs and no credit is taken for these, indeed quite the opposite!  At some point these images were seen by Dave Wood. ( RSPB warden, The Oa ) and the first report appeared on national networks ( still not sure whether DW saw the bird!) 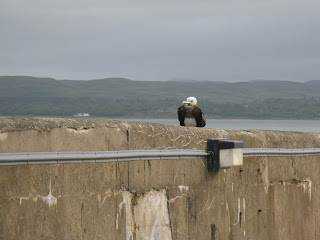 It appears that the bird flew off around this time, although that didn't emerge until much later in the morning. I heard quite literally ( thanks Chris Heard! ) at this point and went through to Bowmore , not realising the bird had not been seen for several hours. Despite spending several hours in the vicinity, including tramping around adjacent rocky foreshores given a completely erroneous report that the bird was moribund (!),  there was no sign of it reappearing. I could receive calls here on my mobile phone, as opposed to home and elsewhere on Islay, so the bonus was being able to talk to a lot of enquiring friends!! 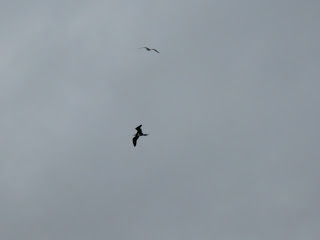 Given the apparent fact that the bird had departed out of Loch Indaal I started home in late afternoon and scoured sectors of the loch along my journey, albeit with no result. Eventually getting home I discovered I'd  had a message left that reported "the bird" had been seen from a local fishing boat ( with the bird perching on its gunwhale! ) and a photograph taken. How true this is I can't vouch for, or the time and position of the boat, but it suggests the bird had moved out of the large sea loch.  So , hoping that I hadn't missed anything along the way, the whole matter is now down to tomorrow!!
Posted by John S. Armitage at 9:09 PM
Email ThisBlogThis!Share to TwitterShare to FacebookShare to Pinterest