For many years I've been an avid reader of the various books written by Professor Ian Newton. It first stemmed from my reading his New Naturalist volume on " Finches", but rapidly moved on to successive volumes dealing with raptors.  Much of what he set out on Sparrowhawks ( and Goshawks too ) fuelled fieldwork by several people in the Peak Park, notably the late David Herringshaw.  My own interests then went the way of Merlin and Hen Harrier and there was much within Professor Newton's successive publications that enthused that commitment.  What is often under-emphasised is that the meticulously detailed reportage in  those books were the results of extensive fieldwork by the author himself.

Within all this time Professor Newton found opportunity to serve on many, if not most , of the ornithological or conservation bodies in the UK including the RSPB.  On the few occasions I met him we talked about....raptors!  Modest, enthusiastic, he is an absolute gentleman with a natural gift of being able to encourage and enthuse. So I'm an unashamed fan , not least based on his continued outpouring of books , the titles of which have diversified in recent years ( Speciation, Migration, Bird Populations ). 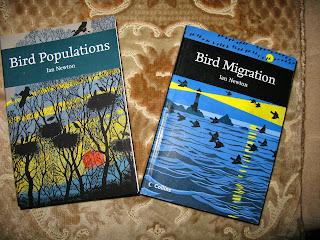 The above two are both recent texts which should be read by all birders. Much will " fall into place" based on anyone's experiences in the field, much will be revealed that is new and much is revealed in the form of references which can then be followed up that will bring additional enjoyment and new levels of appreciation. I wouldn't have the audacity to review the contents of either, but am absolutely prepared to say that not to own them,  read and repeatedly refer to them is to deny full benefit being gained from your favourite hobby!! Both are part of the New Naturalist series and can be obtained in paperback editions.
Posted by John S. Armitage at 10:17 AM
Email ThisBlogThis!Share to TwitterShare to FacebookShare to Pinterest