In the October issue of  British Wildlife there is a very interesting review of the current strategy to cull wintering Barnacle Geese on Islay  ( " The  Islay  Barnacle Goose management strategy:  a suggested way forward ."   Steve Percival and Eric Bignal.  Pp 37- 44 ).  Without repeating what is an absolute plethora of detail , this is a very welcome intervention, fully referenced, and with a raft of suggestions of what might be considered to provide a better way forward to improve a currently unsustainable strategy  and without the necessity for a cull.   Strangely enough there is almost a predictive quality interwoven in the text set against what has arisen recently this winter and. clearly, the advocated solutions laid out in the paper must now be examined seriously by the Scottish Government. 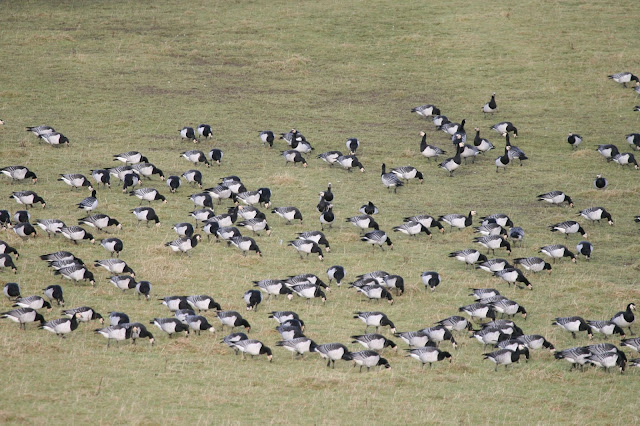 From 1999 until a couple of years ago I lived on Islay, was a member of the SNH ( Scottish Natural Heritage ) team that censused the geese each winter and, additionally, took a keen interest in the burgeoning population of Grey lag Geese on the island. The latter too, quite legally, has been reduced and contained by shooting  but, if an island wide strategy dealing with the presence and effects of geese there were to be drawn together it is my contention that their presence and effects should be included.

We need to remind ourselves of two main aspects, setting aside the fact that the most recent counts might alter the figures slightly  ( see later comments ).   Islay holds around 60% of the global population of Barnacle Geese in winter as well as around 25% of Greenland White-fronted Geese.  The numbers concerned are of International importance and under the Wildlife and Countryside Act 1981 and the EU Birds Directive there is clearly a responsibility placed upon the Scottish Government to recognize this and to ensure the populations are managed accordingly.  However that presence comes with a cost to local farmers upon whose grazing lands the geese feed.  Since 1960 the numbers present in winter has grown from around 5000 to over 40,000. Such has been countered by the Scottish Government offering subsidy payments to farmers under a variety of agreements which have been amended from time to time.  From 2015 it was decided to try and bring the wintering population of Barnacle Geese down  (eventually ) to between 25,000 and 30,000 and , from that year a cull has taken place with a total of 8200 being shot including 3300 in the winter of 2017-18.

Now at this point it is important for me to say that the intention of this Blog entry is to alert people to the situation and to ask that, if they so desire,  they should read the above paper and absorb the compelling arguments it puts forward, the facts and figures it contains , as well as the proposals for the current strategy to be revisited. There are accompanying issues such as the use of lead shot and animal welfare problems.  It may well be that questions raised by birdwatchers who have visited in winter can play an integral part in bringing about change. Islay itself has very few active birdwatchers and no past history of opposition from the same cohort, so external pressure is a necessity. The RSPB  ( and the WWT ) both resigned from the National Goose Forum a while ago, appropriate action at the time, but something that will do little to assist the progression of change now needed. A joint formal complaint to the European Commission was submitted by the two bodies but, given the current mess in which the UK finds itself , one wonders what influence anything emanating from Europe might have under current circumstances.  I also confess to no longer having the confidence I did in RSPB which appears to have morphed into a very cautious conservation body .  So, watch this space for advice on what to do and lend any weight you can to a call for a new strategic approach.

But the story doesn't end there I'm afraid !

A little while ago it was reported that SNH had held a "training day" for staff, farmers and marksmen reiterating  ( one assumes ) the laws relating to both Barnacle and Greenland White-fronted Geese ( which is totally protected ! )  and the appropriate approaches to be taken when implementing the cull.  Without being overly cynical one has to ask, in the light of the evidence referred to below, what prompted the sudden concerns re "best practice " and the need for a "course"?  One couldn't write the script in terms of what then followed , as the extract from The Ileach  ( Islay's local newspaper ) reports on.

Animal Concern Advice Line (ACAL) have published an article, along with three videos of shooters in action , which expresses their disquiet about the shooting of geese on .
According to them, the lethal aspect of the goose management programme should be halted im­mediately. “Barnacle goose num­bers have fallen dramatically,” they say. “The November count having gone down from 48,400 to 30,400, a drop of 37% since the previous year.
“Breeding rates are at an excep­tionally low level with only 3% of the flock being young birds, the lowest percentage in over 25 years. has a duty to care for these otherwise protected birds instead of killing them.”
They analyse the video footage on their site and question whether the shooters are following the pre­scribed rules.
They ask, “Given the matter of seconds between arrival and shooting how did the shooters even attempt to follow the rules and ensure there were no white-fronted geese, curlew, lapwing or other birds amongst the barnacle geese?”
Summing up ACAL’s concerns on 10 January, John F. Robins writes, “On the grounds that it is cruel, scientifically flawed and could be endangering the conser­vation status of the global popu­lation of barnacle geese, Animal Concern Advice Line asks the Scottish Government to imme­diately stop killing geese on Islay and conduct a full review of the Islay Local Goose Management Scheme.”
SNH whose responsibility it is to oversee the culls defended their methodology.
“Goose management on Islay is carried out in the most hu­mane way possible with the aim of reducing the significant level of agricultural damage caused by grazing geese and maintaining the population of barnacle geese at close to the current level of around 30,000.”
They are however limiting the cull this year to 1000 because the goose population this year has seen a dramatic decrease over pre­vious years.
After viewing the videos, The Royal Society for the Protection of Birds (RSPB) commented, “We have requested that SNH run their methodology past the Scot­tish Society for the Prevention of Cruelty of Animals (SSPCA) as an independent animal welfare authority.
“RSPB recognises that Islay’s globally significant Greenland barnacle goose popu­lation has impacts on agricultural systems on . We have, how­ever, consistently promoted an approach that combines strategic goose scaring with management support for affected farmers, rath­er than large scale shooting.”
RSPB believe that SNH’s Islay goose strategy set a “dangerous precedent” for wildlife management in .
“SNH has not shown willing to adjust policy on this, so we have reluctantly resigned our seat on the National Goose Management Review Group,” said Paul Watson added.
Back in 2015 when the cull was first mooted The Wildfowl & Wetlands Trust (WWT) and RSPB Scotland complained to the European Commission in Brus­sels based on our opinion that the Scottish authorities have not met all the necessary conditions, nor had a sufficient evidence base, in order to justify the large cull of a European protected species.
In their complaint they wrote, “We are concerned that the gener­al approach adopted – deliberately reducing populations of protected wildlife species through killing as a low cost-solution where con­flict emerges – may, through the precedent now emerging on Islay, become a standard approach to the management of other pro­tected species and populations in Scotland, and thereafter elsewhere in the UK and possibly further afield.”

Now, I would urge you to take a look at the Animal Concern Advice Line website and navigate through to the videos concerned  ( be persistent ).Clearly the action being pursued by the marksman is unprofessional at best and warrants the above referrals being made. I suppose the last comment to be made, although I doubt the final comment, is that , in recognition of the reduction in numbers of attendant Barnacle Geese this winter on Islay and the low productivity rate arising from last year's breeding season ( 3% )  SNH has announced that the cull will be limited to 1000 birds only this winter ( which might already have been achieved  ? ).

I've a feeling that this might well be a subject to which a future report is required !!

Posted by John S. Armitage at 1:15 PM
Email ThisBlogThis!Share to TwitterShare to FacebookShare to Pinterest