Central Norfolk ( as I describe it! ), Thetford Forest, heaths , fenland habitat has always had a fascination and one that never diminishes. I'm not sure I'd want to live there, but frequently visit, then ," Yes. please! ".
After a night based at Barton Mills Travelodge I travelled early to Lynford Arboretum. Despite the hour the visit was spoilt in some respects by an idiot with dogs, who successfully disturbed the whole area by casting some projectile far and wide, which caused the posse of dogs to complete a "seek and find" exercise amidst great excitement, noise and clamour. Good for the dogs ( they were lovely dogs! ), but not for birding, particularly as the projectile whizzed a bit close on a couple of occasions.  Equal usage of the countryside maybe, but we need to respect each others interests too!

Anyway, I managed four Hawfinch, a singing Firecrest, Marsh Tits, Nuthatch, Bullfinch and Chiffchaff, besides a wide variety of commoner species, so I wasn't too unhappy. I then moved on to Santon Downham ( still earlyish so had breakfast ) and commenced to birdwatch along the river. Whilst I heard Lesser Spotted Woodpecker drumming , could I find it!!  I gave up in the end, having been rewarded with Siskin, Brambling, a brilliant view of a single Common Redpoll ( although I suspect there were other redpolls present that I couldn't see and I  daren't move!), both other woodpecker species and commoner birds.

Late morning saw me moving on towards Lakenheath. As I approached the general area I decided to have a lunchtime break located at the Lakenheath Airfield Base observation area and, hopefully,  see some activity. I thoroughly enjoyed it!!  F15 aircraft successively rolled up and took off amidst noticeable vibration, a phenomenal roar of engines and the bright glow as afterburners were switched on. For any birders with young sons who are visiting the area I'd recommend it. It's certainly quintessential young lads stuff, but I think wives and young daughters might need persuading!  Strange then to contemplate the later announcement that the USA might be in the process of considering withdrawal from the base after many years of tenure. Incidentally I'm not sure I enjoyed the air manoeuvres as much later in the afternoon as the self same aircraft roared over Lakenheath Reserve!!

And so I made my way to the RSPB Lakenheath Reserve with the intention of remaining there for the rest of the day. Whenever I visit this reserve I marvel at what the area used to be rather than what the reserve looks like today. It epitomises, in my view, what can actually be created as a viable alternative to what previously was rather unproductive land as far as wildlife was concerned, as the photograph of the information board sets out. Click on the photograph to enlarge it. 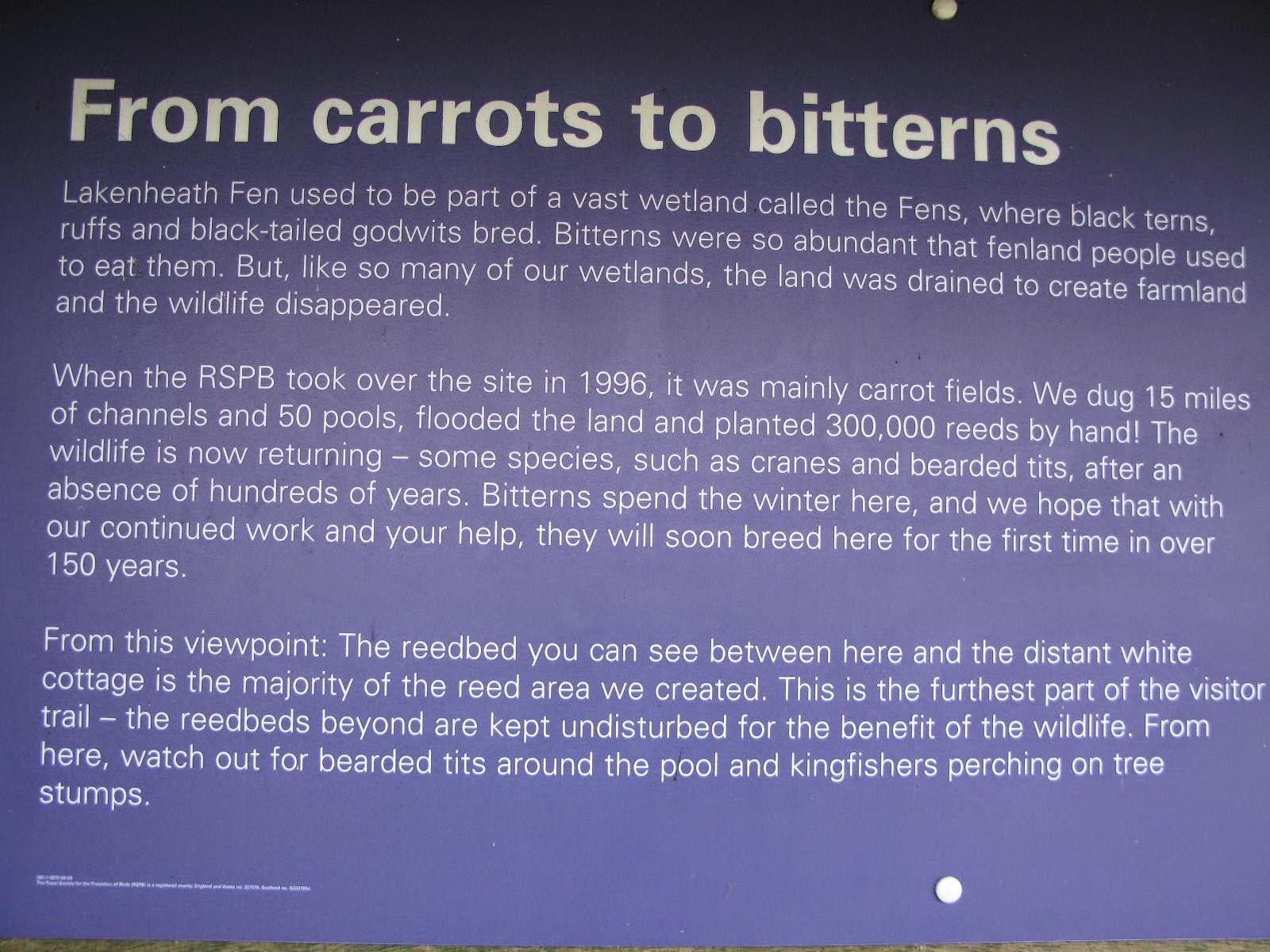 I may be wrong in the following assessment, in a way I hope so, but it does seem that, in raising the water table, it has led to a destabilisation of part of the woodland on the reserve, as the photograph below shows. 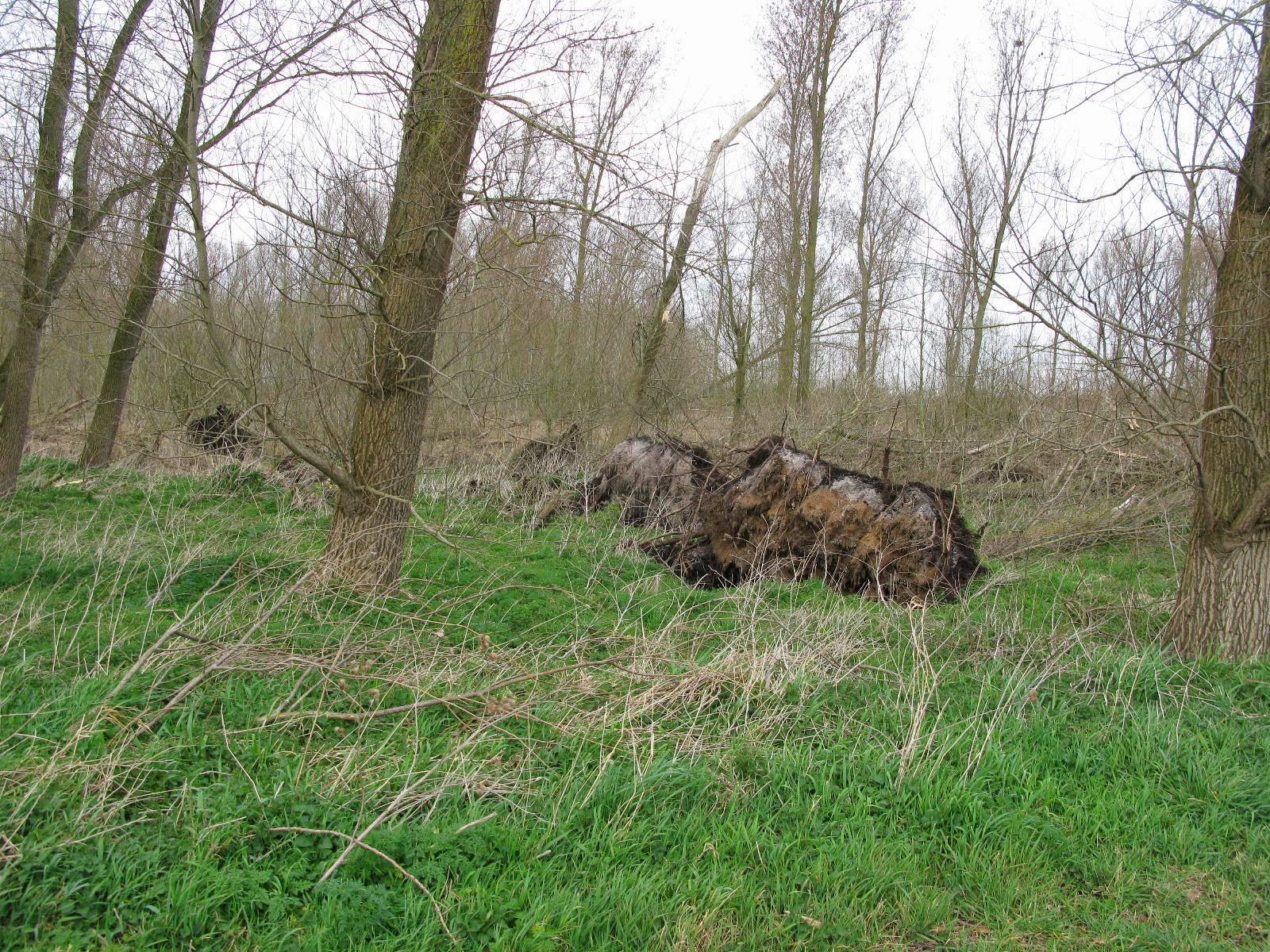 Various ones of the mature trees appear to have keeled over which is a great shame.  Whether this is a retrievable situation is a challenge for the future for which every success is expressed.

Turning to birding , Cettis Warblers sounded off in a couple of places.Whilst I sat patiently in the hope of seeing Bittern , it wasn't to be. Various Marsh Harriers floated around over the reserve and I was reminded of how close to extinction these birds had been in past times. Now they are breeding widely in the UK and seem set to increase even further. 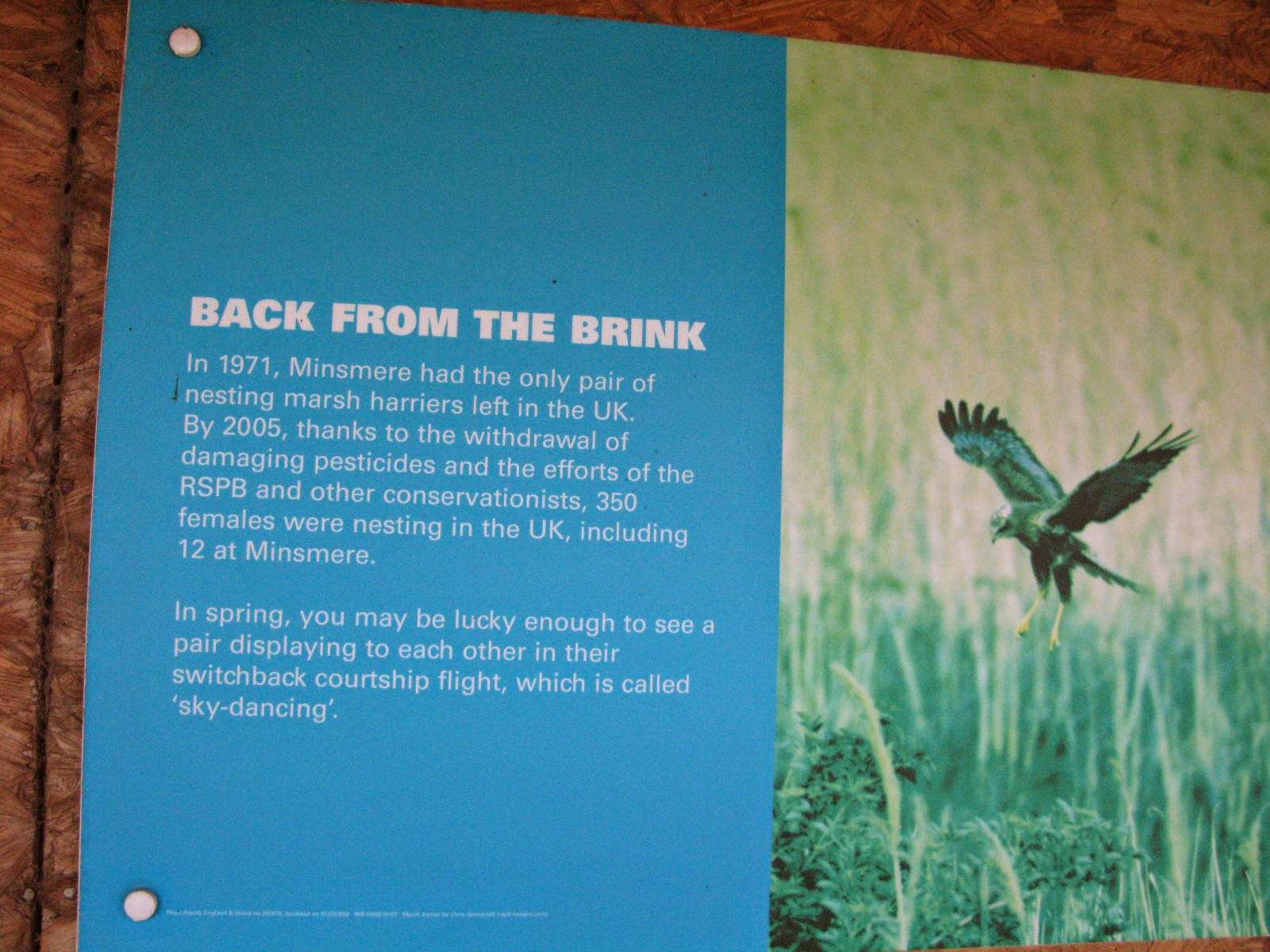 However, such success is not always the unmitigated improvement desired. It's suspected that , last year, Marsh Harriers on the Lakenheath Reserve possibly predated Common Crane young, which is a very cruel consequence of hosting rare species on a single reserve. Moving to Common Cranes, I have to admit sitting at the foremost hide until I was frozen and close to giving up any hope of seeing them until.......one suddenly appeared on the river bank way over to the right!!  And then two more flew across the whole reedbed and landed nearby to the first bird. A couple of minutes ensued within which good views of the three birds were obtained, but then two of them started to display and for several minutes too.  Tremendous, unexpected and way beyond what had been hoped for!! A mixed, but very successful day!
Posted by John S. Armitage at 9:54 PM
Email ThisBlogThis!Share to TwitterShare to FacebookShare to Pinterest