Given the pleasure I always gain from visiting the RSPB Lakenheath reserve I'd promised myself a look at the newly emerged initiative aptly named the Great Fen Project ( follow this link for details  Great Fen Project ).  This is a very ambitious project aimed at linking the two last remaining remnant areas of true fenland, Woodwalton Fen and Holme Fen, both of which are National Nature Reserves, in what will be a representative fenland area of 3700 ha. in extent, 60% of which has been acquired already. Commencing in outline as far back as 2001 evidence of its presence is now beginning to emerge.  I have to say that finding key locations in an essentially flat landscape is difficult, sign-age is not yet at its best, but eventually you get there. 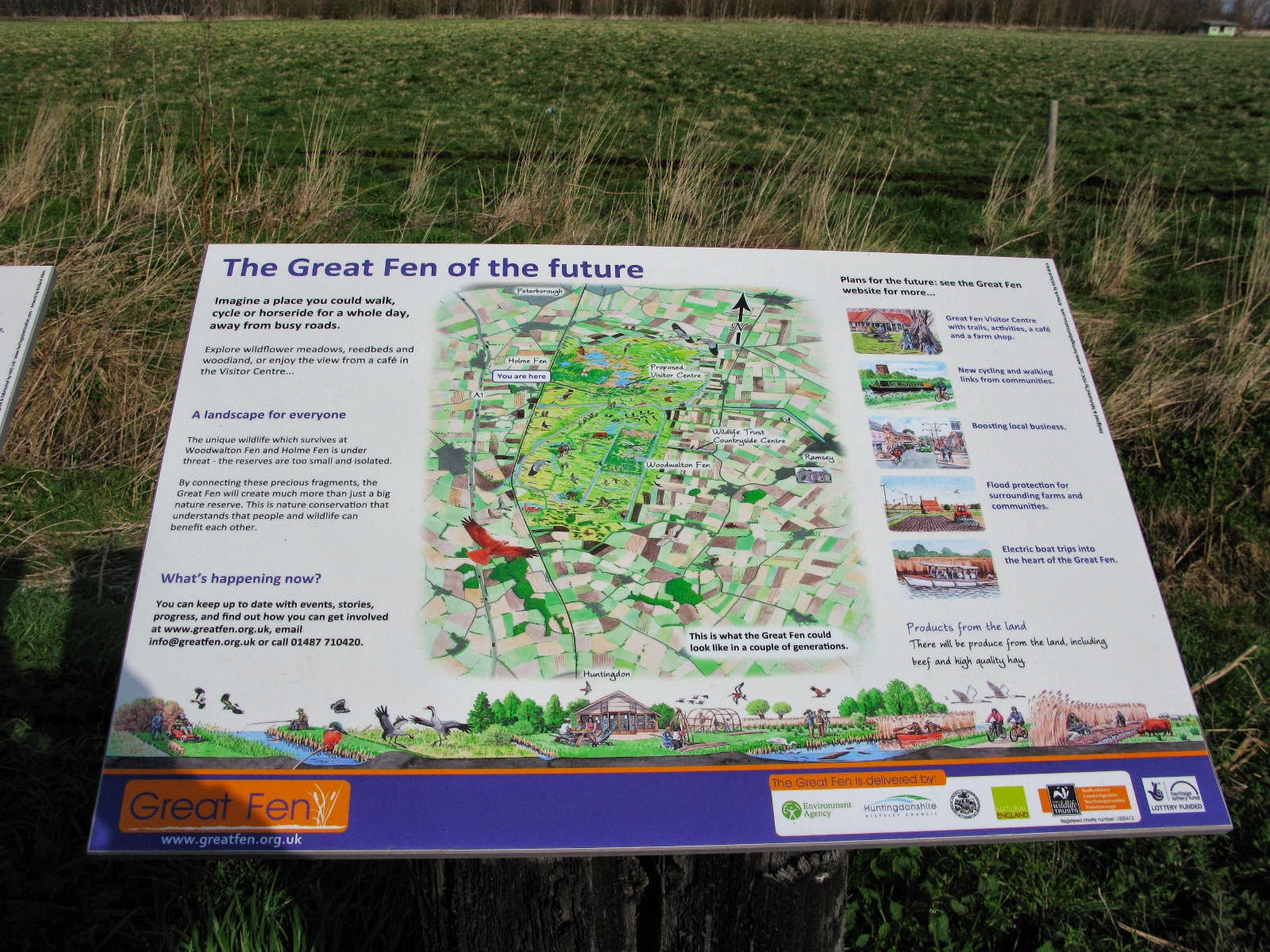 It's fascinating, deserves success and I'll certainly visit again in the future. Click on the above picture to gain an enhanced view of this ambitious initiative. I'm told not everyone is supportive and I'm a bit intrigued as to how the purchase of high grade agricultural land has been so easy!! There is some in-built flood protection measures involved and perhaps that has helped. The detailed boards in the main car park facility were detailed and deserved to be pored over. 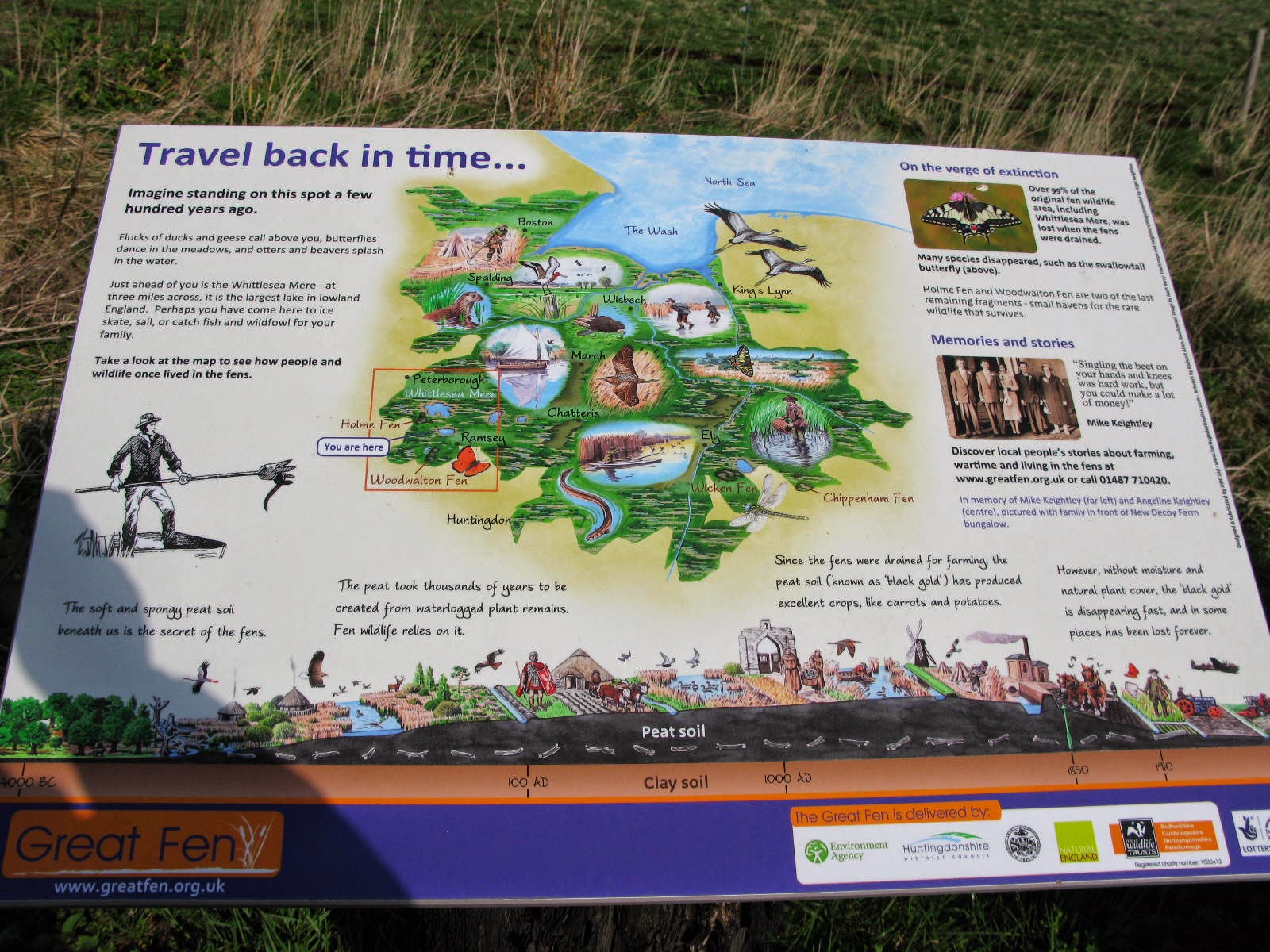 Certainly the depiction of times past show how immensely rich in wildlife this area once was and, undoubtedly, will be once again, although clearly much work remains to be done. Nonetheless this is the sort of broad brush, big canvas type thinking that conservation in the UK needs set against the patchwork quilt of small sites upon which our wildlife heritage so often relies that are so easily affected, even destroyed, as a consequence of  planning decisions at local level. I was fascinated by the collection of what I took to be fossilised trees retrieved from the bogs of yesteryear that provide a more than adequate boundary for the car park!! 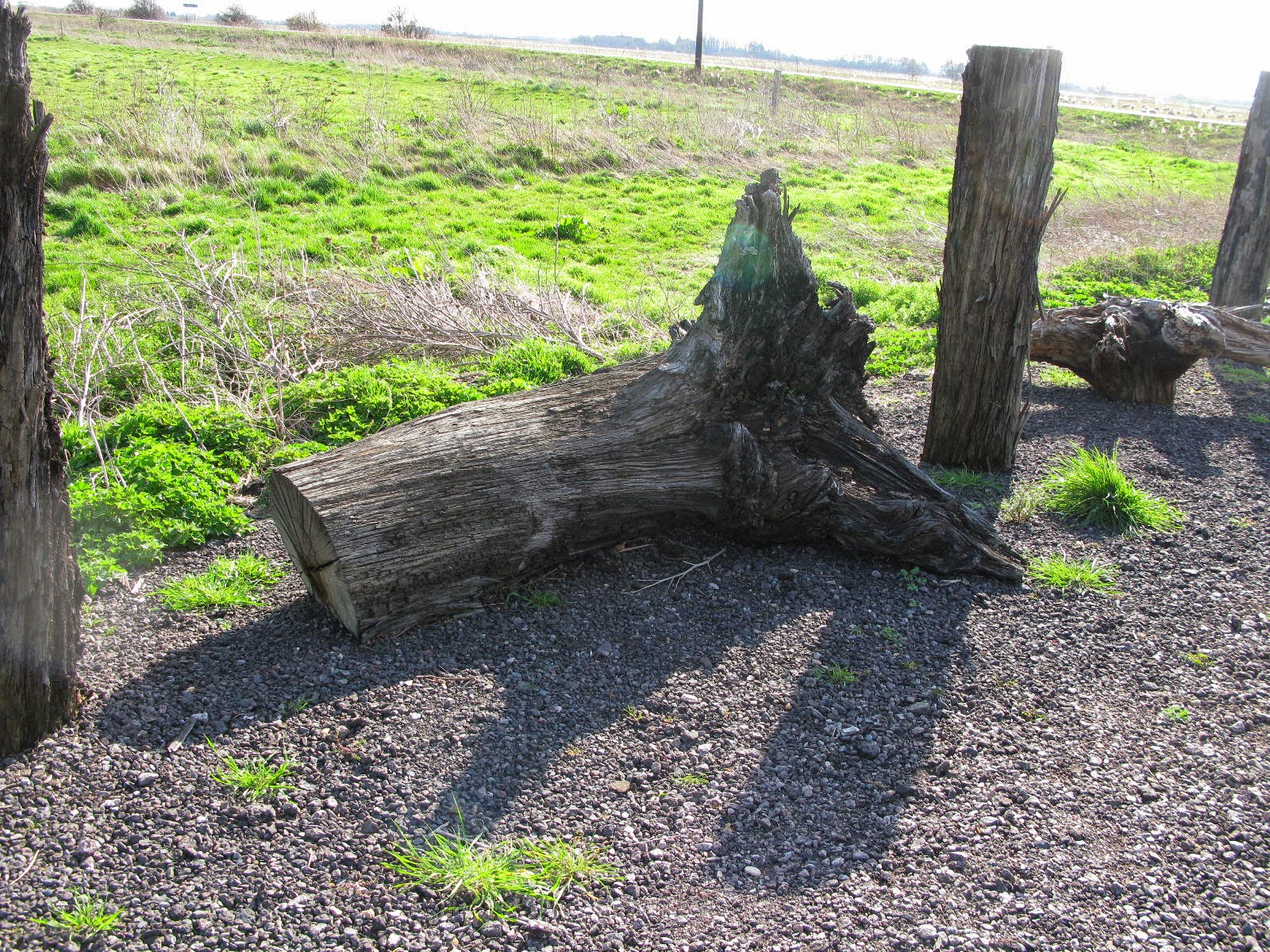 And so more than satisfied with declared intent I too moved on to try and see the long staying Great Grey shrike at Holme Fen, one of the main constituent areas of the Project.  No, I didn't see it despite tramping around for ages, although I did have a magnificent Red Kite overhead, ca.150 Fieldfare, Chiffchaff, Buzzard and Green Woodpecker.

Moving on I went south and popped into what has become a bit of a favourite area when in transit,  Little Paxton Gravel Pits Reserve. A great place with a good variety of birds, particularly duck species and passerines.  Nothing special, at least today, but a great place and always worth a visit.  I then took on my locational challenge.....Fen Drayton. A fairly new RSPB reserve.  How the hell do you find this place? There's no Sat Nav reference in the BirdWatchers Yearbook, the road sign-age is pathetic and starts as you almost enter the reserve, .......a job to improve on I'd suggest!!  Visitors casting around, wasting fuel,  is not particularly "green", folks!  Having said all that, it's a great place and one I always try and visit, ( but with repeated difficulty when it comes to locating the damned place! ). On this occasion everything I saw was pretty routine , but it's just a very pleasant place to be in.

And so I launched myself across the Fens as I know them, flat, featureless ( I'm too used to using the Paps of Jura as reference point! ) and, today, with not a lot of birds. Contrasted to , say, January, when I usually visit, much of the area has already been tilled or is in the process of preparation for future crops. However, close to Welney I had around 250 Whooper Swans in a field near the reserve and, later, a group of at least 25 Little Egrets, plus a couple of Grey Heron, feeding around a lens of water. Perhaps not the day I'd intended , but rewarding nonetheless!
Posted by John S. Armitage at 7:18 PM
Email ThisBlogThis!Share to TwitterShare to FacebookShare to Pinterest