A mere 3-4 inches of snow thankfully ensured our plans remained intact as we headed across to the coast at Bacton.  A seawatch from a point opposite a now closed breakfast venue (!) produced Red-throated Divers offshore but nothing on the move, so we moved on northwards.  Sustained by a breakfast at Morrisons ( see the hopefully forthcoming and potentially best seller The Barnsley Boys Breakfast Book ) we then moved along the north coast with conditions certainly no worse.

Calling in at various sites our destination for the day was Titchwell RSPB  Reserve, although we paid a quick visit to the Choseley Barns site where we had a few Yellowhammers and a single Corn Bunting. Moving on to Titchwell the car park area provided a winter wonderland spectacle. 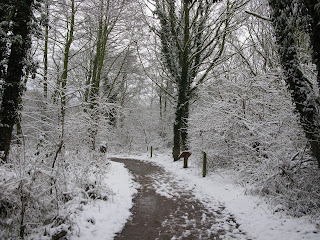 In the tangle of  bushes behind the Centre we had excellent views of a Chinese Water Deer that, despite its colour managed to "lose" itself very effectively. Within the same area, Chaffinch, Brambling, Greenfinch, Song Thrush, Blackbirds and endless Robins were confiding and feeding frantically. A single Jay seemed out of context and repeatedly called at us from an exposed tree.

Moving towards the sea a variety of duck and waders were on the various lagoons including Pintail, Gadwall, Shelduck, Spotted Redshank, Avocet, Black-tailed and Bar-tailed Godwit.  A flock of Barnacle Geese ( 60 ) posed a question as to origin as they fed adjacent to numbers of Dark-bellied Brent Geese. Eventually we reached the coast where an immense number of gulls was present all along the strand, mainly Herring and Black-headed Gull , but with Common and a single Mediterranean Gull. Various waders were noted including Grey Plover, Oystercatcher, Knot , Sanderling . Behind the dunes a flock of Skylark held a single male Lapland Bunting which provided excellent views, and within the nearby saltmarsh vegetation numbers of Meadow Pipit and Reed Bunting desperately foraged. Patient scrutinizing paid off as we eventually found one, possibly two Water Pipit. We decided to spend the last hour and a half watching the harrier roost within which time we also had Little Egret, heard both Cetti's Warbler and Water Rail and had some excellent close views of  feeding Bearded Tits before they went into roost. A small flock of 20+ Corn Bunting swiftly flew across the reed bed previous to their moving into roost.  Marsh Harriers had successively swept into view, circled over the main reed bed before dropping into roost together with a single ring tail Hen Harrier which took a little more time to decide on an acceptable location.  Finally, with the light beginning to fade, we made our way along the bank. On a section of open mud a couple of Common Snipe fed and were joined by a single Jack Snipe, which provided good views in silhouette showing its smaller size and shorter bill  before it settled and briefly afforded reasonable views as darkness descended. Moving back to the car park a single Muntjac deer stealthily crept across the path into deeper cover. Later, as we unloaded the car at our overnight accommodation in Cley a Tawny Owl called, providing a fitting end to what had been a successful day later celebrated by decidedly palatable Abbot Ale!
Posted by John S. Armitage at 10:46 AM
Email ThisBlogThis!Share to TwitterShare to FacebookShare to Pinterest