Good sense shines through in the end!

I recently came across my, now dog-eared, copy of the classic book by Rachael Carson entitled "Silent Spring". A note inside its cover suggests I bought it in 1966!  I've actually commenced to read it again in view of the controversy and debate surrounding Neonicotinoid pesticides which is currently raging and the concerns that they are responsible for the drastic reduction in bee popoulations. At some point it would be interesting to draw parallels with the situation which applied way back in those early days of pesticide usage and to gauge whether, in the interim, we've learned any lessons from the varying crises which engulfed us at the time. 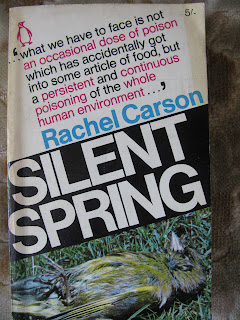 What is coming through already is the underlying message that, in any such situations, there should always be absolute certainty and solid proof available. Political expediency, vested financial interest, incomplete or divisive research are certainly not the factors which should be the determinants if problems are encountered.

And so what, until this very day, have we learnt from such sage advice and, with hindsight, the dreadful indictment visited upon our wildlife in those times of almost fifty years ago?  Well, precious little if we consider the political manoeuvring surrounding the current debate, particularly in the run up to the decision taken by the European Commission today. Thankfully a two year moratorium has been gained preventing the use of three particular pesticides, except in restricted circumstances. The UK Government  had actively opposed the ban with the current Secretary of State, Owen Paterson, clearly supporting the cause of the industrial producers. Such is hardly a surprise, as the current role of DEFRA appears to be to raise resistance to any initiative limiting economic development, despite its clear responsibilities to nurture natural habitats and wildlife. Given 90% of our crops are reliant on natural pollinators, the setting aside of the precautionary principle surely signals we have much to lose if we get it wrong. I wonder where out free market specialists would be then?  Long gone one imagines!

Hopefully the two year moratorium will allow more focussed research to occur, including a full examination of other causes which are held to be at fault.. Opinion is divided, without any doubt, but this is not an issue to be determined on the spin of a coin. Results suggesting the drastic recent declines in bees have not been caused by the Neonicotinoid pesticides would then clearly indicate their usage could be resumed, hopefully with accompanying monitoring in place. However, until that time, today's decision sets out a sound basis upon which the differences in the conclusions between laboratory and field trials can be better understood.  I did , however, chuckle to myself when I realised the end of that moratorium period almost coincided with date of our next UK General Election in 2015 and the immediate "responsibility"  the issue placed on the incoming Party!!

As an aside, it's interesting to look at the front cover of the above book and the dead Greenfinch depicted in the illustration. Recent times have seen disease decimate our Greenfinch populations. I heard a bird in full "wheezy" song last week on Jura, a sound I don't believe I heard at all on Islay or Jura last year.  It's a salutary reminder of the pivotal position our wildlife occupies and how great a  regard we should pay its members and the role they play as biological barometers, signalling effects within the environment that we might not fully understand, but towards which we ought to give due recognition !
Posted by John S. Armitage at 4:36 PM
Email ThisBlogThis!Share to TwitterShare to FacebookShare to Pinterest