Sadly, Jane Dawson, died on the 12th April in a Glasgow Hospital.  Given that Jane had an interest in birds it was inevitable our paths would cross at some point. Having also lived for a while within the same village, Portnahaven, on Islay,  discussing wildlife matters outside the Post Office or calling in for a coffee was  not an infrequent routine.

Jane Dawson's life was a fascination to anyone interested in birds. Firstly, though, some background details!  She and Rod Dawson had married, farmed in Lincolnshire and set up a wildfowl collection. Rod Dawson was both farmer and conservationist and introduced Jane to birdwatching. In 1971 they moved to Islay , having bought the Easter Ellister Estate on the Rhinns. Both had a love of wildfowl, seaduck in particular, and had formed a friendship with Sir Peter Scott, founder of the Wildfowl Trust, artist, conservationist and son of the famed Scott of the Antarctic. He was to visit them on Islay from time to time and stories from that period carry a fascination in themselves.

Sadly Rod Dawson died from cancer in 1977 at the very early age of 34 years, leaving Jane with two young daughters and the task of continuing the farming enterprise at Easter Ellister. In 1984 she set up the Islay Natural History Trust in memory of her husband, a local facility that continues to this day ( see www.islaynaturalhistory.blogspot.uk ).  She had also continued with the wildfowl collection and became an accomplished aviculturalist,  having concentrated on the captive breeding of King Eider and Long-tailed Duck. Much of the work broke new ground, in terms of the methods employed, and left her with an extensive list of world wide contacts. Despite the tragedy of those times Jane drew together a book dealing with the period entitled " The Old Squaw". It covers a treasure trove of matters relating to Islay, the Estate and of wildfowl. 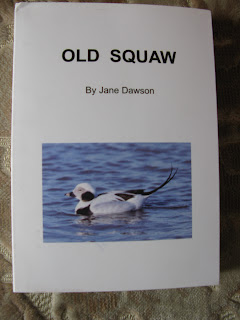 The title, I suspect, linked as much to her sense of humour as the name commonly afforded Long-tailed Ducks!!!  It's an absorbing and informative read and can only be recommended. I'm uncertain whether any copies are currently or easily available to purchase, but will make enquiries. If anyone is interested please contact me through the Blog .
/
In 2003 Jane Dawson suffered a stroke and, for a period, had to cope with the consequences.  By this time the wildfowl collection had reduced and she began to operate a Highland Pony Stud from Easter Ellister. Typically, this was overseen with intense interest and , unsurprisingly, was a success!

Jane Dawson was a woman of firm and forthright opinions, the ground beneath which might change a little from time to time, but, on one subject, she remained adamant in her condemnation of its very existence! Following her stroke she was prescribed a  course of statins from which she suffered a series of painful side effects. This led to her arriving at a very precise view of their validity and usefulness, the perfidy of those who created them , promoted them , researched them and, in particular, prescribed them!!  Naively I once ventured into this subject area and was left in no doubt that my very faculties were in serious decline should I venture to consider using the medication!!!  All such was accompanied by mischievous laughter and it will be for occasions of that sort that she'll be sorely missed.

For other information, photographs etc may I refer you to www.janeislay.co.uk
Posted by John S. Armitage at 1:58 PM
Email ThisBlogThis!Share to TwitterShare to FacebookShare to Pinterest