A rather cloudy start, still cold, but with no frost.  An early seawatch over a relatively "flat" sea was spoilt to some extent by a distant bank of mist, which embraced any passing birds and made counting untenable. Eventually it retreated as a weak sun did its job but, by then, passage was limited.

Incessant streams of auks northwards, returning to their breeding haunts, mainly of 30-50 birds and mostly Razorbills where it was possible to identify them, accounted for several hundred on the move by the end. Likewise a continuous parade of adult Gannets southwards in small parties, doubtless returning to Ailsa Craig (?) from  feeding in areas further north. Fulmars plied back and forth, with periodic attendance at their nearby island colony just off the coast. Of most interest was a small passage of Manx Shearwater ( 2013,178 ) which, in the end, reached almost 60 birds. It seems rather early to be getting this many birds, as I've always thought the return of the earliest birds to UK waters was around now. Will delve further!

Moving off I was interested to come across several groups or small flocks of geese in the southern part of the Rinns, some mixed Barnacle, Grey lag and Whitefronts,  but also separate parties of Greenland White-fronted Geese. I remember Blogging last year of having heard these birds on the move one night and wondered , given their wariness, whether these birds too might have been new arrivals. By now, those in residence over the winter tend to be more confident and tolerant of vehicles etc. Confirming a feature which is becoming ever more common in recent Springs, a pair of nominate Canada Geese were in the area as well. 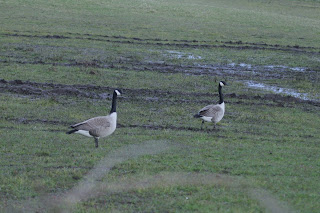 Journeying northwards up the Rinns the various pastures looked dull and "tired", uniformly cropped down and not yet showing any real signs Spring. Several larger flocks of Barnacle Geese were scrutinized, but contained no exciting "finds". By now numbers of these geese have begun to exploit what might best be described as sub-optimal choices as far as feeding areas are concerned.

Inner Loch Indaal was, in the main , an expanse of gleaming mud and sand but, toward Black Rock several Great Northern Divers were in evidence. 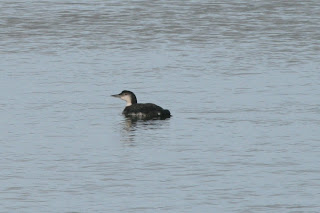 A whole variety of areas were then visited and produced a good array of birds...Fieldfare, Mistle Thrush, Grey Wagtail, (2013, 179 )  Peregrine, Raven, and displaying Buzzard before I moved on to more pressing matters!  Standing out on an area of open hill , there was no doubt that Spring had arrived with nearby bubbling Curlew, Skylarks aloft on song and noisy Oystercatchers calling from somewhere down near the coast. Whether temperatures suggested otherwise it seemed the birds had taken a decision to move on with things regardless.......
Posted by John S. Armitage at 10:18 AM
Email ThisBlogThis!Share to TwitterShare to FacebookShare to Pinterest