Sadly the day proved to be a bit less than co-operative with heavy showers, mixed visibility, but the odd clear period as well.  Met up with Chris and Tony Johnson from Bolton who, as previously the long serving leaders of the RSPB Bolton Members Group, I've known for quite a few years!  As can be imagined, almost as much discussion took place as birdwatching, and certainly the world should now be in a better state given the various solutions put forward to certain problems!!!

Most of our day was spent around the RSPB reserve at Gruinart, but we first of all sought out the juvenile Red-backed Shrike, which has apparently been there several days but wasn't  "pinned down" until Saturday. A rather fine bird, extremely active and which has adopted a well defined area as its own. Compared to what has been seen on the east coast of Britain in recent times this bird's appearance is a most welcome reflection of those arrivals!!! 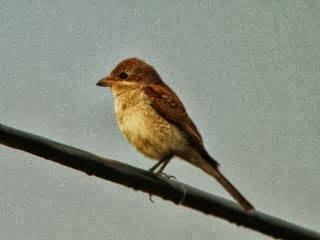 Courtesy of James How, via Ian Brooke.

After more than our fill of this very co-operative bird we then spent some time overlooking the lagoons on the reserve itself.  Teal numbers seem to have improved within the week and the flock was being repeatedly disturbed by a female Hen Harrier causing them to spend prolonged periods in flight. A single Black-tailed Godwit was also around as was a splendid showy pair of Gadwall that spent quite a period immediately in front of the hide. A few Wigeon and Shoveler were in evidence too.

As ever the spectacle provided by the geese was the main event of the morning, particularly when being spooked and rising en-masse over the nearby feeding fields along Gruinart Flats.

A trip along to Ardnave was accompanied throughout by quite heavy rain, but at least it was lunchtime.  Two adult Mute Swans and 4 well grown cygnets plus three Goldeneye was all that was on offer. We decided to spend time around Loch Gorm, but the weather was against us, little or nothing seen, so we retired to a well known nearby tea house where company and cakes were in profusion !  Predictably, the weather improved at the very end of the afternoon but, as I made my way homewards, the sight of a large mixed feeding flock of Grey lag Geese, gulls and eight Whooper Swans was some compensation for what had been a slightly testing day! 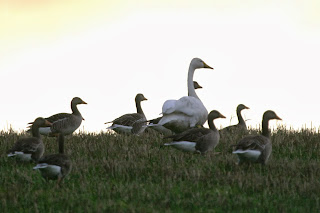 Posted by John S. Armitage at 10:05 AM
Email ThisBlogThis!Share to TwitterShare to FacebookShare to Pinterest