An absolutely glorious day spent mainly in the Loch Gruinart area. With obvious signs of autumn appearing from falling leaves, evenings drawing in , temperatures good but noticeably cooler at the extreme ends of the day too, today was nonetheless an example of the best the season can award. Early morning broke fine accompanied, even before first light , with the calls of countless Barnacle Geese at roost in the upper parts of the loch. 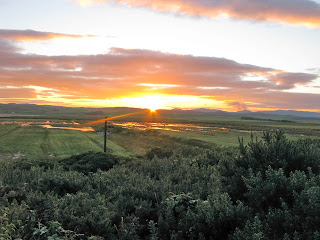 First to move out to their feeding grounds though were Grey lag Geese, departing with a cacophony of calling leaving others of their species feeding around the lagoons with lesser numbers of Greenland White-fronted Geese.  Many thousands of Barnacle Geese were strung out down the loch with much "readjustment" to their massed distribution as they reacted to the presence of, firstly, a Common Buzzard and then an overflying Grey Heron. Gradually small numbers moved to nearby feeding areas, but the vast majority remained at roost , some until well past mid-morning.

I never tire of watching geese, even to the extent of looking at every passing skein despite having seen their departure point from the massed throngs out on the loch!! 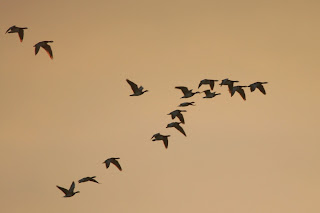 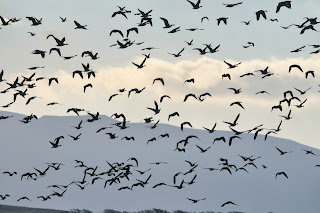 There's something about a collection of flying geese that is simply irresistible.

Eventually the whole situation was thrown into complete  and deafening disarray by the arrival of an adult White-tailed Eagle that not only put the whole remaining roost of several thousand geese to flight , but flew through the middle of them as well. Confusion mixed with chaos!  It then saw fit to sit out at the edge of the Merse for the rest of the morning, no doubt providing a level of malevolence sufficient to keep anxiety levels at a high threshold.

Most of the geese that arrive in October spend quite a time at first in the Gruinart area before gradually moving out after three weeks or so to exploit other feeding areas.  With the arrival and presence of the eagle, large numbers of geese congregated on fields at the head of the loch , whilst others filtered back and remained on the exposed sands and mud of the loch itself.  Throughout the time following their arrival the birds are ultra nervous and "spook"  very easily but, with patience, it's possible to get close views of them. 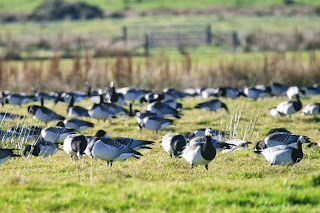 Certainly a spectacle, an experience to place effort against and something not to be missed ! A great morning, oh , and the male and female Hen Harrier quartering the field below the viewing platform weren't bad either!!

Posted by John S. Armitage at 8:55 PM
Email ThisBlogThis!Share to TwitterShare to FacebookShare to Pinterest