Way back, indeed when I was still working with the RSPB and as part of a management training course, I remember attending a session entitled Managing Change. Not everyone accommodates change easily or readily, in fact some people oppose any alteration to what might be an established position, whatever its kind.  Such, I suspect, might be the situation that emerges with the RSPB's new magazine, "Nature's Home" replacing as it does its forebear, the much beloved Birds magazine.  Now I have to declare that I first became aware of the Society when it was still ensconced at Eccleston Square in London!!  I'm not saying I've been a member continuously since that time, but certainly for a significant proportion of it.

We all used to be all so dutiful and accepting in the old days ( sounds like an advert delivered by Alan Titchmarsh ), in fact I guess my only question in previous times would have been " Where is Sandy?".  But the truth is the change to a HQ site or much loved item of constancy can inflame passions in some beyond belief!  Now, admission time!  I don't particularly warm to the presentation of RSPB in lower case on the logo ( and shan't use it either ! ). If you really want to see what my views are on the issues surrounding what the RSPB has decided to change , then read my Blog entries on 4th August and 18th September.  As far as the new magazine title is concerned, then I worry a bit to be honest.  It seems to me that the Royal Society for the Protection of Birds might logically choose to have a magazine title linked to its main raison d'etre. But the case has been put, and I accept it. The working objectives of the Society have widened ( considerably !)  and  a more broadly based wildlife magazine is the result.  OK, I'm being dutiful. A minor criticism though is that I feel the cover is too cluttered. 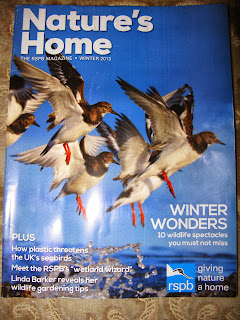 Now I'll simply present another example and leave you to draw your own conclusions!! 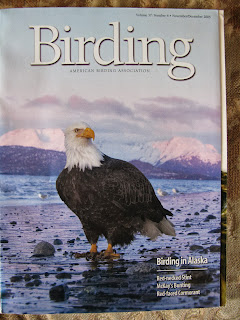 I'm not a designer but I suspect the above image somehow conveys all the necessary messages without too much accompanying text.

Of course what really delivers on any organization's objectives is the contents. When the magazine arrived ( my mail arrives late afternoon ) I put on the kettle and then settled down to a comfortable session taking in the contents of this presumed threatening and newly emerged item. I was engrossed and read it from cover to cover.......my tea went cold!  These are a few comments,


So, all in all the "change" wasn't as painful as anticipated. In fact ( Mark Ward, Editor. ) I've to admit I liked it, so job well done.  There were a few issues relating to statements associated with uplands and raptors that I wasn't all that happy with, but I'll deal with those in a separate Blog.  What did we all fear?  A reduction in items to do with birds, I suppose, so there's no case to answer. The inclusion of items relating to other wildlife wasn't intrusive or cuckolded the main subject content we all look forward to. After all the huffing and puffing is over, what we've all to settle down to is, collectively, working towards making things better for wildlife which , as successive reports have outlined, is on its uppers and needs more and more support from us all.

Posted by John S. Armitage at 4:34 PM
Email ThisBlogThis!Share to TwitterShare to FacebookShare to Pinterest