On the 15th October the Law Commission put out an Interim Statement relating to the review it had carried out on wildlife legislation,  Law Commission interim statement., which can be reached through this latter link. After extensive consultation with wildlife and countryside interests a summary of the exercise, findings and recommendations is now openly available for our scrutiny.

I must admit I always thought this much vaunted exercise might not deliver up to the expectations invested in it.  RSPB admitted way back in February that its own future tactics would revolve around the exercise held by the Commission and doubtless have worked hard in the period since its launch to gain acceptance of key elements of law where they felt revision or inclusion was necessary, including Vicarious Liability. Although such an offence had entered Scottish Law, repeated attempts to gain its early adoption for England and Wales were rebuffed, including a direct statement of "non-intention" by the then DEFRA Minister, Richard Benyon in Parliament.

The Law Commission too have now rejected a call for it to enter into law in the commonly accepted form in which it was so often described, details of which can be found under Section 1.74 in the above statement. Instead they have put forward an alternative that will put the burden of proof on the prosecution which, in my humble opinion, is likely to lead nowhere. So, where do we go from here?

I confess to a feeling of frustration and disappointment, particularly with the declared public position currently adopted by RSPB.  In the recent winter edition of its new magazine, Nature's Home, much is made of an article by Simon Barnes,a prominent journalist and writer, and his comments about raptor persecution. But it's all been said before! What's new given that similar strap lines were being pumped out thirty years ago and at regular intervals in between?  In the same magazine an article examining the future of our uplands includes diffuse comments at best on actions that might emerge at some point.  Now, I'm prepared to accept that the timing of the issue of this magazine and that of the Law Commission's statement didn't conveniently coincide. Indeed, one imagines that, in the light of the Commission's declared view about Vicarious Liability, there would have been different comments coming forward. But in the cold light of day, what is the Society now to do when it comes to raptor persecution and, in particular, addressing the loss of Hen Harrier as a breeding species in England brought about by intensive persecution in recent times?  Is this situation something that must now be accepted as lost?   Is there not an imperative, demanding of whatever financial resources are necessary, to ensure that the targeted activities which brought about the obvious reduction of  Hen Harriers continues to be combated. Whilst I'm sure the RSPB agree, I personally believe that its options should now include more direct confrontation with the factions responsible as the time for progress via commentary ( or clowns! )  is now gone! 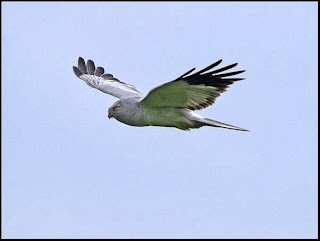 Courtesy of the Isle of Man Government via Alan Tilmouth and Flikr.

It seems to me that the thing which shouldn't happen is for a void to be allowed to embrace the current situation, in other words there is a need for swift, decisive action on how things might now move forward. Repeated rhetoric, fine words and appeals for an adherence to the law are unlikely to achieve much given unproductive attempts in the past. Similarly further exhaustive examination and analysis of  "the problem", those held to be responsible  and so on is now little more than cataloguing disaster. Alongside all this the  grouse management industry itself, within which there is a constituency who are against persecution, has singularly failed to alter the activities of some of their members and , therefore, self regulation can also be consigned to the bin. The new recommendations by the Law Commission are unlikely to successfully act as a major deterrent  in my view, which means additional action is required.  I've no illusions that the RSPB will have more than a few ideas on this front about which it would be foolish to reveal details in public. However, from the many people I've spoken to I believe that a significant proportion of the membership would support more radical action than has been apparent in the immediate past. Indeed I suspect we would urge the Society to move forward in that respect, not as an element of a marathon, but in a full blown sprint,  if I can paraphrase the Chief Executive!!  This is a time to grasp the initiative to avoid others gaining confidence and developing ancillary topics around raptors that would assume the limelight and cause the issue of persecution of raptors to be sidelined.

The 15th October perhaps saw a campaign lost, but the battle is still to be resolved and none of us should lose heart in that respect. And remember, RSPB, indeed never forget, we're all behind you.

Whilst the Tory dominated Government currently appears to pay scant regard to E-petitions ( if that associated with the badger cull is anything to go by) , the number of signatures provides a measure of the amount of public concern that can be quoted subsequently and upon which questions can be raised.  If you haven't already done so PLEASE sign the E-petition relating to the licencing of upland grouse moors and gamekeepers which can be found at the following link.
Licencing of upland grouse moors and gamekeepers

Posted by John S. Armitage at 11:43 AM
Email ThisBlogThis!Share to TwitterShare to FacebookShare to Pinterest