A good day spoiled in some respects!

I must admit that I've got a bit "absorbed" of late by this Barnacle Goose question on Islay and so, previous to dawn, saw me travelling northwards up the Rinns  to check on a couple of hunches.  However, previous to leaving home I'd spent a time listening out to what might be happening on Lossit Farm to the north, where, if geese are present, their grumblings and anxieties carry quite far and bely their presence. No such cacophony emerged this morning! As I left, a Woodcock rose from the edge of the grass moor and headed off towards the forestry , its night-time feeding completed.

As I passed Bruichladdich Pier groups of Starlings were emerging from roost in the first of the real dawn light and moving off like groups of missiles in a variety of directions.  Arriving at Machir Bay I carefully approached a vantage point overlooking the beach. No obvious roosting birds, but soon a small flock of Barnacle Geese arrived ( to roost after feeding under the moon/dim light overnight?). 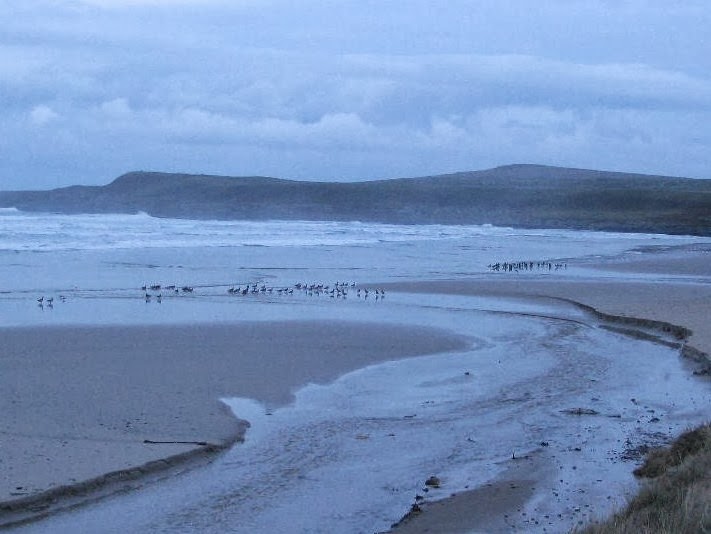 The recent rains have swollen streams and rivers and you can see the upgraded channel across the beach that has now developed and that the birds undoubtedly visit for drinking and bathing. This beach is quite popular and roosting birds inevitably get disturbed, which is what then happened.  Before then a flock of about 200 Barnacle Geese came around the coastal headland behind me from further south, very probably the farm I mentioned previously where the geese were stripping out a reseeded field, and then swung out towards nearby farms.

Given activity had completely dissipated I decided to complete some WeBS Counts  ( BTO Waterfowl counts ) on nearby lochs. Noticeably Loch Gorm  carried a large number of Teal ( almost 300 ) some of which had possibly been "displaced" from the obviously enlarged and flooded lochans in the vicinity.  Moving on to the RSPB Loch Gruinart  Reserve  I managed a couple of hours really enjoyable birding before the rain moved in.  Ducks abounded with some absolutely magnificent Pintail on show, Shoveler, Wigeon, Gadwall, Teal, Red-breasted Merganser and Shelduck , plus a couple each of Whooper Swan and Mute Swan.  A journey around to the eastern side produced several waders ( Turnstone, Redshank, Greenshank, Ringed Plover, Curlew, Bar-tailed Godwit, Oystercatcher ) before conditions began to prove untenable.

As I journeyed back home the Iceland Gull near Uiskentuie showed well, Light-bellied Brent Geese fed both on the beach along Upper Loch Indaal, or bobbed unceremoniously in what were now rather choppy waters, and the rain lent further emphasis to its intent to spoil things. Typical!!

Posted by John S. Armitage at 8:23 PM
Email ThisBlogThis!Share to TwitterShare to FacebookShare to Pinterest