Today appeared to be the first real opportunity to do some real birding. Well, that was the theory, in reality things turned out differently!
I'd intended carrying out the first intensive visit to "the Patch" and to hopefully get a few photographic shots of the best bits of habitat within it.  Well, forget the second bit as things proved to be dull and miserable, set against inevitable better opportunities that will arise in the future!  Generally conditions weren't ideal anyway as the F5/6 onshore wind was blustery, the sea somewhat angry and visibility impaired with mist.

Several flocks of geese were around with well over a hundred Greenland White-fronted Geese ( none carried collars unfortunately! ) and a few Barnacle Geese in a couple of sheltered fields. Later 4 Grey lag Geese flew around over the coast. Other than Herring Gulls and Fulmars nothing was on the move offshore. Several Shags were feeding in the relative shelter of various bays and still managing to lift themselves out of the huge breakers coming onshore before diving into the turbulent waters. Single Red-throated Diver and Eider were located momentarily before being lost to view. At this stage the forecast heavy seas weren't anywhere near there worst, although rocks emerging two metres above the surface were obscured with ease by swirling walls of cascading water. 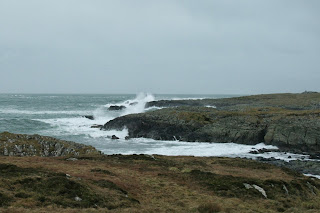 Clearly conditions were set to get worse so it seemed sensible to try and cover the area as quickly as possible. Previous to arriving at the bay above I'd parked for a while in a convenient spot to watch over the sea to watch for birds on the move. A dead Brown Hare nearby attracted two Buzzards and a Hooded Crow which all "held station" in the onshore wind, doubtless keeping an eye on their booty in anticipation of my departure!  Across on McKenzie island Atlantic Grey Seals were hauled up on each of three small beaches well above the splash zone and, at the north end 11 pairs of Fulmar crouched blissfully on their selected territories.  Other than Starlings, no passerines were encountered, so I moved on to another bay, which is sheltered , and regularly attracts a few waders and other feeding birds. 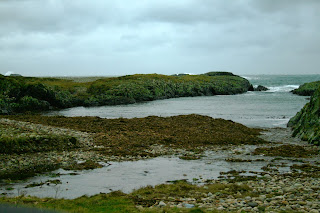 Nothing was in the tiny bay, the whole beach area was piled high with kelp and the inflowing stream, swollen with recent rain, forced an energetic course through to the sea. An then it started to rain ( seriously rain, as we're used to "regular" rain hereabouts ) suggesting things might be coming to an end. Covering the rest of the "Patch area", I was surprised to see eight rather round brown bundles exposed towards the centre of a field. Eventually I determined they were all Brown Hares, tightly pulled in around themselves and occupying what must have been a relatively sheltered patch in an otherwise seemingly open field exposed to the wind.

And that was it, with nothing else new seen, and the weather deteriorating rapidly. Looking at past Blogs we have had things worse around this time of year ( snow on odd occasions,  four days without power on another.......in fact the location of "the torch" and  "the stove" are in a rehearsed position at home since then ). This recent weather is nonetheless beginning to be wearing and hopefully we'll get some respite soon. As for "the Patch" I guess the challenge still remains, and in major part too!!
Posted by John S. Armitage at 7:41 PM
Email ThisBlogThis!Share to TwitterShare to FacebookShare to Pinterest