With predictable coincidental timing the Government rushed through its announcement to allow oilseed rape seeds to be sown this autumn to be treated with the bee killing neocotinoid insecticides as MP's and their staff scuttered from Westminster for the summer recess. Admittedly the decision will only apply to 5% of the area where oil seed rape is grown. This , according to Government Minister George Eustace, is predominantly in Suffolk. Is it a coincidence , I ask , that the constituency of our Secretary of State for the Environment ( Liz Truss ) is South west Norfolk whose support for farming and cheese production know no bounds. Perhaps we should persuade her to engage with honey too.

Conservation organizations such as Buglife ( http://www.buglife.org uk ) are outraged at the decision and feel it to be a flagrant disregard for our native wildlife and a convenient ignoring of rules we have in place to safeguard our environment.  DEFRA  maintains that , whilst they have applied the precautionary principle, there is still a lot of ambiguity about the evidence. One suspects that was lifted from a "Yes Minister" script. 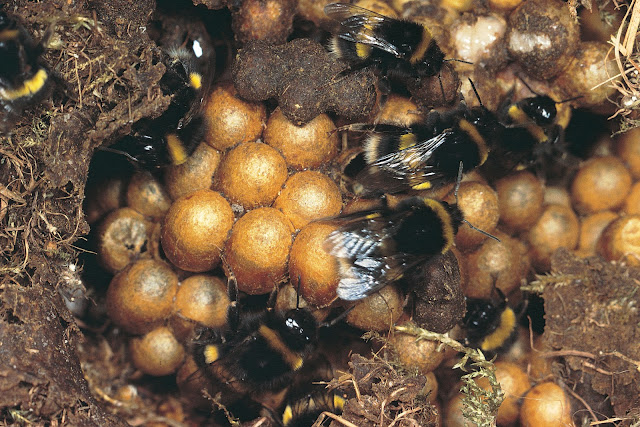 The National Farmers Union despite alluding to their original application for a ban to be lifted referring to a restricted area ( see farming press ) are now waxing large about what will happen to other farmers in other places, that the decision is too late and  " that future work is intended with regulators towards more efficient authorization ".

It needs to be remembered that , in 2013, the European Union placed restrictions on the use of these pesticides based on scientific research. Since then further research has reinforced that decision. The fact that these pesticides kill our pollinators such as bumblebees and honeybees, but also other useful insects, appears not to concern the self acclaimed Stewards of our Countryside who, along with others in the past also appear to believe they should aspire to "Special Case Status".  Uhm, well I'm old enough the remember the utter cock-ups surrounding pesticides in general use in our agricultural environments last time round and what it all resulted in. But , of course, those who plead necessity and  compromise will be nowhere to be seen when that day comes round.

Apparently the specific areas where use of this treated seed is to be used has not yet been determined but, according to the NFU,  it will be those areas where most damage has occurred previously. Whose running this show I wonder.  I also wonder if the Government's Expert Committee on Pesticides (ECP ) will now be allowed to publish the Minutes of its meeting wherein the decision to advise the Government to uphold the ban was determined. To date the Government has refused to allow them to publish these or reveal other details. One imagines the decision to review the situation will conveniently be sidelined in the plethora of matters which will accrue over the summer recess.

In the meantime please continue to campaign for the blanket banning of these substances and raise issues relating to the above with your own MP ( as several of them who had inquired about the matter had not received any responses ).   Government at its best!
Posted by John S. Armitage at 7:54 PM
Email ThisBlogThis!Share to TwitterShare to FacebookShare to Pinterest