My summer with the Barn Owls.

Regular readers will have picked up comments from time to time about "my" local Barn Owls. It all started last year with a bird taking up residence in the barn and being seen occasionally. Pellets suggested it wasn't always in residence and had an alternative roosting site.  Activity locally, when it used to fly around and "scream", now suggests it was advertising its presence and seeking out a mate.

Earlier on this year I walked into the barn and, hey presto, sitting on one of the higher beams was not one , but two , Barn Owls. Success! On a separate occasion when a pair of Chough had shown interest in one of the entrance holes to the barn ( there access and a nest box at either end ) an intensive period of activity ensued, which was reminiscent of the Brian Rix theater comedies of many years ago with constituent players rushing around and appearing and disappearing into and out of different access and exit points. It was also a bit aggressive and somewhat noisy!

Things then settled down a while ago with only one bird being seen from time to time.  It would be very easy to conclude you hadn't any in residence as the birds are unobtrusive to say the least. And then proof positive that something was going on when, presumably the male bird, went into the nest hole with prey. Over the ensuing nights the frequency of prey delivery grew except when weather conditions were poor. I only ever believe I saw one bird involved in this until very recently when two birds were seen out hunting locally. On one fine night the male bird was appearing back every twenty minutes or so with prey. These largely comprised of Field Voles, but with the occasional Field Mouse. Obviously darkness brought observations to a close, but it was a rewarding experience throughout. It also raised the point of how many Field Voles there are "out there" when hunting was depleting there numbers night after night.

I never went and sat in the barn whilst this was going on as I'd taken a decision to keep disturbance to an absolute minimum. What you have to consider is that all this was done from the comfort of an armchair whilst watching TV, the observations usually starting around 2130 hours and ending midway during the "Ten o'clock News" !! 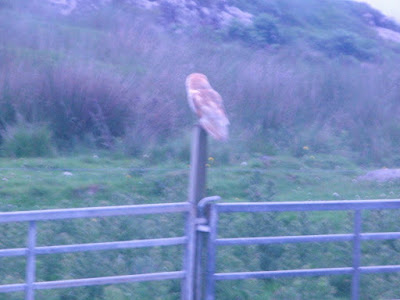 Now I don't claim this is a good picture, simply an illustration of what could be seen through the back window. Not bad , eh?

On Friday night (17th ) this week we had high winds and some rain and it occurred to me that hunting would be impaired and what might happen to the young should they have to withstand a night of hunger. Yesterday, first thing in the morning, I went out to retrieve the refuse and recycling bins as they had been flung across the yard by the high winds. As I came back in a movement caught my eye and, lo and behold, an obvious young Barn Owl flew a short distance from below the car. It was fully feathered, but long strands of down hung from its underparts and poked out from elsewhere. It sat quietly on the ground towards one end of the barn and I idly thought it might possibly attempt to return there. Instead it rose and flew off about thirty metres and pitched into a gully full of vegetation. I looked in the barn to see if any less well developed youngsters were perhaps still around, but all was silent. Last evening I watched in vain for any signs of the adults, but there was none and no apparent activity locally either. Youngsters still give out begging calls to there parents even after fledging so I hoped all would be well. Sadly last night was stormy with a lot of rain, ( although the weather now is bright and sunny as I write this ) and I'd have serious misgivings about the ability of a bird to survive out in the open.  I can't believe that was the only youngster based on the amount of prey being brought back so will keep an eye and ear open for any remaining members of the family. I'd rather hoped I'd see them having regrouped last evening and to be sitting out in a row on the fence shown above, but such was not to be.   Nonetheless a privilege to have been associated with and some good memories.
Posted by John S. Armitage at 10:53 AM
Email ThisBlogThis!Share to TwitterShare to FacebookShare to Pinterest