Is the UK set to welcome back the Eurasian Lynx ?

The successful reintroduction of the Iberian Lynx in both Spain and Portugal has encouraged the Lynx UK Trust to consider applications to Natural England and Scottish Natural Heritage at some point during this summer for the necessary licences to release 4/6 Eurasian Lynx at each of three locations in the UK.  The latter has been extinct here for around 1300 years, is slightly bigger than its immediate relative in Iberia and is thought to have a good chance of establishing viable populations that will attract wildlife tourism and photographic tours.

These animals are very secretive and solitary and are not a threat to humans.  Their main prey will be woodland deer species,  Rabbit and Brown Hare.  They are not an animal of open landscapes and are likely to remain within the cover of woodland ,indeed it has been dubbed " The keeper of secrets" due to the nature of its secretive habits. 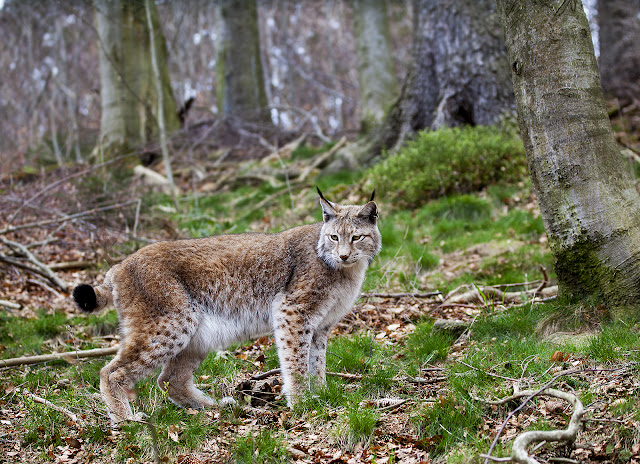 This photograph is supplied by courtesy of Erwin van Maanen, via the Lynx UK Trust.

Already three privately owned, unfenced Estates have indicated a willingness to be part of such an introduction scheme. These are located in Norfolk, Ennerdale, Cumbria and near Huntly in Aberdeenshire, Scotland.  Certainly the species could have a positive impact upon deer numbers in some areas and thereby limit the economic damage that they inflict by browsing young trees and growth.  Deer have no natural predators at present in the UK and the re-introduction would essentially introduce a more balanced situation than at present. Casting our minds back to the recent calls for action in reducing Muntjac numbers in Thetford Forest to thereby reduce economic damage and  hazards to traffic links positively to this suggestion in my opinion, as opposed to the cowboy tactics that would be likely to ensue by calling for numbers to be shot! It might well be that the presence of Lynx might bring about a reduction of feral cats in these areas. Many rural areas have a problem ( including here on Islay ) that people are unwilling to acknowledge and for which no official policies are in place.

Of course there has been predictable warnings from vested interests about the " inevitable" damage that would arise through attacks on livestock, none of which is determined from any sensible studies or evidence.
Such claims inevitably, if not immediately, then lead to the suggestion of a subsidy programme  being set up!!  It would seem the NFU are sceptical and that concerns have also been expressed by pet owners, parents, and gamekeepers.

Under the European Habitats Directive there is a section advising constituent Governments to "study the desirability of reintroducing ( threatened ) species that have become extinct in our region".  This proposal fits closely with that ideal and deserves every support. Such an introduction would , necessarily, have to be  closely monitored and it has already been disclosed that any released individuals would be fitted with GPS collars and their movements tracked. Simply to consider the potential benefits is quite astonishing. Reducing the deer population and the damage it causes in woodlands, reducing the need for deer fencing, reducing the incursion onto farmland by deer and the resultant damage arising are all potential benefits. Even the increase in the amount of undergrowth in woodlands and the concomitant benefits to other wildlife would be beneficial.

So, on balance, I do hope that the Trust is wholly successful in its endeavors to reintroduce the Eurasian Lynx to the UK.  Just to consider the possibility of seeing one in the UK  someday is an enthralling thought as far as I'm concerned. The joy that an increasing number of people get from simply watching wildlife grows by the year and this initiative would be yet another positive action that would enhance and extend those activities.  All success.

For updates in the future please refer to the Trust's website   www.lynxuk.org

Posted by John S. Armitage at 6:52 PM
Email ThisBlogThis!Share to TwitterShare to FacebookShare to Pinterest