The inevitable attraction of Loch Ryan called and a visit to a selection of viewpoints was made before deciding what best to do with the day .  On the western side some superb views of two males and one female Long-tailed Duck was had. Even just with binoculars the views were tremendous!  Whilst all the usual suspects appeared, discovering a single and then several other Slavonian Grebe ( 4 ) was  rewarding . Three Knot, a few Shelduck, Rock Pipit were all welcome newcomers.  A relative absence , at least at this stage, of divers is noticeable, but may be down to little more than poor luck on my part !

I decided to go east ! Having got to Newton Stewart, and with visibility and general weather conditions improving, I struck off into the hills within the Galloway Forest Park.  The weather actually deteriorated and visibility wasn't of the best as I ventured as far as Clatteringshaws Loch. A chipping Crossbill and a couple of other indistinct calls were all I earned for a rather cold hour , so I retraced my steps.  I always feel in awe of Alexander Murray as I pass both the humble ruins that were his birthplace and the magnificent monument erected to commemorate one of Scotland's most remarkable sons.   That someone brought up with six other siblings in a tiny stone cottage very much out in the wilds  should aspire eventually to be Professor of Oriental Languages at Edinburgh University is a wonderful story. 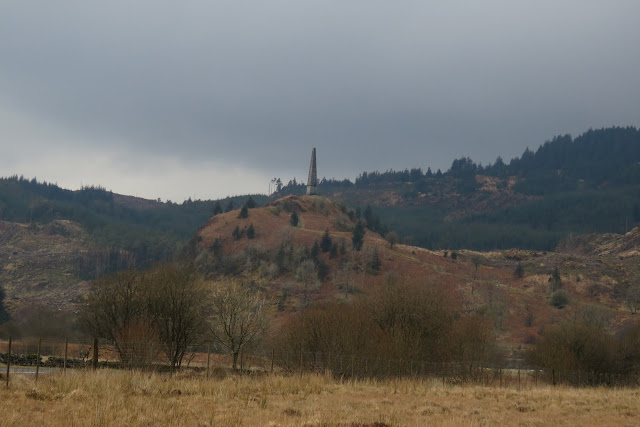 A view of Murray's Monument showing the bleak , open surroundings in the vicinity.

Retracing my steps I went southwards into The Machars to visit the wetland area nearby to Wigtown.  Well, imagine my surprise when this scene met my eyes! 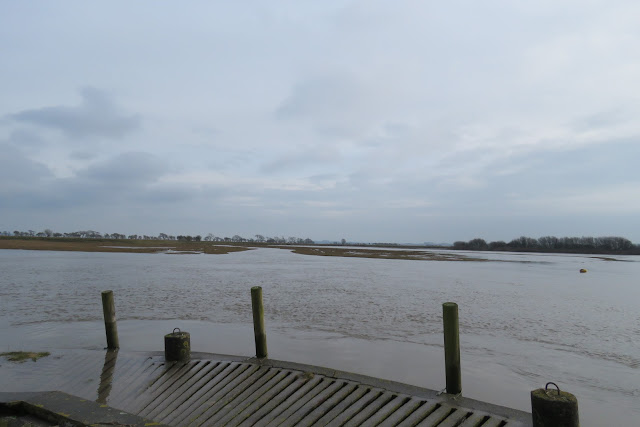 The area lies at the confluence of two rivers  ( the Cree and the Bladnoch ) and, at the higher tides within Wigtown Bay, presents this watery view !  The access to the hide was cut off for a while, although little would have been in view initially. Eventually the waters receded and views of several Little Egrets, Grey Heron and parties of Pink-footed Geese and Barnacle Geese were secured. A single Greenshank fed within a flooded area and in the adjacent marsh numbers of Teal, Pintail and Shoveler afforded great views. This is a splendid site ( when not flooded ) and always worthy of a visit. Concluding sightings were a couple of Reed Bunting , odd Meadow Pipit and Skylark and an early "White" Wagtail, the first migrant of Spring ! .

I chose a cross country route to return to Starnraer which typified the quinessential countryside of Galloway's agricultural heritage. Turning a corner I was surprised to come across a very large gathering of Pink-footed Geese, which I scrutinized for any scarcer species without success. 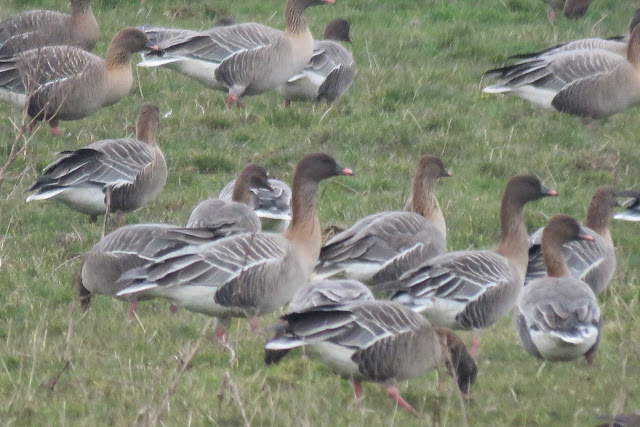 All in all, a mixed day but one with some nice surprises and overall success.
Posted by John S. Armitage at 10:23 AM
Email ThisBlogThis!Share to TwitterShare to FacebookShare to Pinterest