Whilst the morning was taken up with some formal commitments the afternoon saw me at the coast north of Spurn Head doing a bit of sea watching. It was rather quiet, although a few Red-throated Divers were moving around along a coastal stretch that is a traditional wintering area. I decided to go down to Spurn itself, take a few photographs at leisure and look for the Spoonbill that was frequenting the Kilnsea Wetlands area.
Spurn has a very special place in my memories, my heart even if we want to get sentimental, as it was the first real place that my serious birding "took off" after Wath Ings, now the Old Moor RSPB Reserve, where I received tutelage and friendship from figures such as Dave Standring, Alan Archer, Colin Bower, Mike Clegg, Malcolm Rhymer and David Ashurst. My first holiday at Spurn was, I think, towards the end of the 1950's when Geoff Aynsley and myself had a couple of weeks there at the end of August one year. Fellow kindred spirits were Charlie Winn and Ken Hardcastle, but we were all  "presided over" by one, Lt.Col, H.G.Brownlow, who used to take up residence there for weeks at a time. His passion was bird ringing and his habit was to recruit volunteers for either "long" or "semi-long" drives down towards the Warren heligoland trap. I don't think I ever endured a "long" drive, "semi longs" were extensive enough and sometimes only resulted in a couple of unfortunate Willow Warblers despite the effort!! His pronouncement, on one occasion, that we were all good chaps, but he wouldn't have recruited any of us as subalterns said it all!! And it goes on for probably a couple of decades, memories galore, some absolutely priceless!

Anyway, after some general birding, resulting in not too much, I went up to Kilnsea Wetlands. Imagine my surprise when , in walking to the hide overlooking the wetland area, I turned a corner on the access track and there was the Spoonbill. A great view , but I did wonder about a bird that was so tolerant. 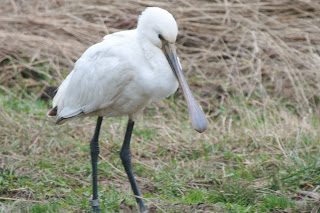 The bird was obviously weak but, nonetheless, was able to fly past me for a few metres. I later learned, sadly, that it had been found dead on the day following, no doubt a victim of the harsh weather and the limited resources available at a site which has only relatively recently been developed. A great shame!

Later that evening I also learned ( Grrh!! ) that a Richard's Pipit had been seen at the same site , but had moved off early in the morning towards Sammy's Point on Humberside.

Posted by John S. Armitage at 7:35 PM
Email ThisBlogThis!Share to TwitterShare to FacebookShare to Pinterest