Spent the whole morning on a series of routine things, mainly phone calls given the lack of computer facilities.  Matthew duly arrived on the afternoon ferry into Port Askaig amidst quite nice weather. It's not always like that on Islay , folks!

Given we'd only a couple of hours of daylight left we remained around the Sound of Islay and Bunnahabhain area. He'd already picked up a handful of  species ( Hooded Crow, Shag, Black Guillemot ) but we pressed on in the hope of more. Tide and sea conditions were good and odd Great Northern Divers were in the northern part of the Sound. 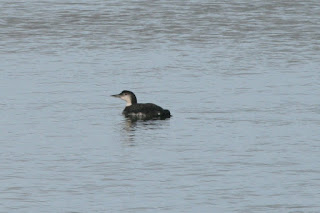 We continued down to the Distillery and after a few minutes located the adult Iceland Gull. Whilst I can't locate the precise date, I believe this is the 9th or 10th winter it has been with us. It first appeared as an immature and has been returning to this favourite spot each year since. From it's vantage point on the wharf it sallies out and joins incoming fishing boats into Port Askaig, riding on the prow very often, and then presumably avails itself of the material discarded on sorting. A nice bit of learned behaviour!!  Whilst it's not a particularly sharp photograph, the following shot of the bird in flight does show the quite nice broad white trailing edge to the wing. 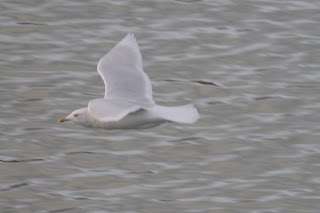 So, after such initial success we made our way down to Loch Indaal and slowly southwards home to Portnahaven. It was good to spend time near the house at dusk listening to the natural world gradually "wind down". Odd parties of geese overhead, a Common Snipe calling and displaying (!), corvids moving into roost and then, finally, silence! A good start to what, hopefully, will be a productive weekend.
Posted by John S. Armitage at 7:39 AM
Email ThisBlogThis!Share to TwitterShare to FacebookShare to Pinterest