It had snowed overnight, but only to a depth of 2" or so. Our first destination was Salthouse beach where we quickly found four obliging Snow Buntings. There was no sign of much else so we returned to Cley and walked east on the coastal bank , i.e. towards Salthouse, in an attempt to locate the Shorelarks seen previously, but to no avail. Various groups of Linnet and Goldfinch fed on the sparse vegetation and a good collection of duck and waders was on Arnold's Marsh. All in all the general spectacle was somewhat forlorn as a Little Egret aptly portrayed within a snow filled vista. 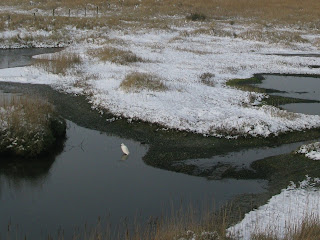 After calling in to see Patrick Dwyer at the Cley Centre we continued westwards to the Holkham area with the intention of having a good tramp around the Park to search for Lesser Spotted Woodpecker. Whilst, on one occasion, we had a single Green Woodpecker and three Great Spotted Woodpeckers in the same tree there was no sign of their smaller relative. Despite an extensive search we were out of luck although had some fine views of Redwing foraging below the grand tress that comprise the woodlands and of several Woodcock too. 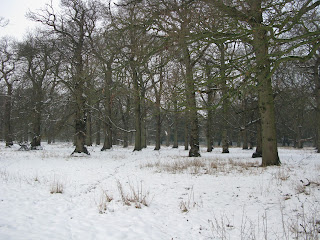 With time creeping on we decided to go to Hunstanton to view the sea. Despite good sea conditions little was in evidence from either the cliffs, other than the odd Fulmar, or the Ski ramp site and so we reviewed what we might best recover from the day. Our decision to go to Wolferton Triangle and sit it out in an attempt to see Golden Pheasant took the vote and so we went even further west. So, imagine our  incredulity and delight when, at 1521 hours on a winter's afternoon, two magnificent male Golden Pheasants were feeding out on the grass "verge" running along the woodland. We'd usually relied on the advice of dawn and dusk visits being best, neither of which we'd found over the years was guaranteed , so mid-afternoon was a pleasant surprise. The colours on these birds has to be seen to be believed with contrast, vibrancy and sheer variation of colour being so extensive that it's difficult to retain a mental picture of what they're like!! This was more than an apt substitute for what we'd failed to see earlier!

And so, what to do now with a good hour or so of daylight remaining. Titchwell and the harrier roost took the vote and we took up station behind the new "blind" beyond the Fen hide which gives a good view of the reedbeds. A further surprise was in store as we had good views of the single female Red-crested Pochard before beginning to scan around in earnest for arriving harriers. As before 9/10 Marsh Harriers arrived to roost and a single ring tail Hen Harrier together with odd Little Egret. A couple of hunting  Sparrowhawk sped across the reedbeds and  a roost of Magpies noisily formed nearby until gradually the activity and noises of the day gave way to silence. Calling Cetti's Warbler and a couple of Water Rail brought the final Act to a close and we discovered that we were the last car left in the car park yet again!! Yet another rewarding day!
Posted by John S. Armitage at 10:54 AM
Email ThisBlogThis!Share to TwitterShare to FacebookShare to Pinterest