A rather damp journey across the Fens from Ely to visit Little Paxton Gravel Pits Reserve. Whilst I've been there before, mainly in winter, I was looking forward to seeing what might be in store on a more leisurely visit in Spring despite the dismal conditions. I wasn't disappointed. 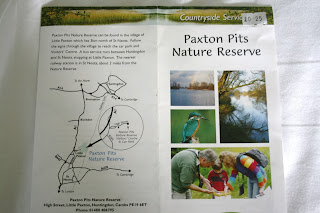 This is a gem of a reserve at any time of year, one of it's greatest attributes being that it's located conveniently next to the A1 and, therefore, presents the convenient possibility of a visit whilst you're on the way to somewhere else. There's a Visitor Centre, which is open within reasonable hours and serves the best cup of tea for 70p I've ever encountered!! 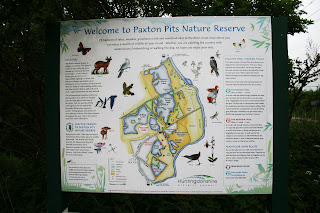 As can be seen from the above reserve map the area has viewing hides and a variety of habitats reached by well laid out walking routes.  At this time of year the attraction is the reserve's Nightingales, but in winter you're equally likely to see Smew as far as a seasonal attraction is concerned. The most unbelievable thing is that it is so close to the UK's main arterial highway and yet gives an abiding impression of being within the depths of the countryside. Tranquility ( well, there's a bit of traffic noise to be honest ) and beauty go hand in hand and it's a place that should be on everyone's radar and not for a one off visit either!! 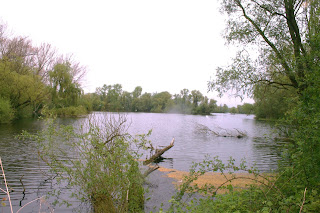 My expectations were met almost as soon as I set off on my own journey of exploration with a Nightingale (2013, 211) in full song not very far from the car park.  I continued after a while and had a good variety of species without putting in much effort , including my first Garden Warbler ( 2013, 212 ) for the year. After a while I resolved to return and really take in the beauty of  "Spring songster", but I had no need as another one commenced to give full force to its song nearby to where I'd stopped. It's quite a time since I've had the opportunity to simply stand and listen to a Nightingale and I was absolutely captivated. It's not just the range, but the richness and depth to its notes that are so engaging. I stood for a long while and enjoyed, in solitude, what was a continuing presentation that it would have been easy to persuade oneself was being given solely for one's own benefit. An experience to savour and a memory to treasure, and I'm no romantic I have to admit! I returned to the Centre and had the good fortune to come across Veronica and Trevor Gunton. Trevor was a past colleague at RSPB, also now retired, and is involved with the administration of the reserve,  so it was good to see them both and have a "catch up".

Finally moving on I went up to Grafham Water, but there was very little on offer. The weather was beginning to deteriorate as I moved on to the Fen Drayton RSPB Reserve, which is not too far away. Unfortunately the heavy rain intensified, and proved to be unrelenting, so given it was late afternoon I returned to Ely and commenced to enjoy my purchase of "Life On Air" by David Attenborough which I'd purchased ( for £4 !! ) from the second hand book stall overseen by the Guntons at the Little Paxton Centre....another reason to go in for a cup of tea!!!
Posted by John S. Armitage at 4:08 PM
Email ThisBlogThis!Share to TwitterShare to FacebookShare to Pinterest