An early start yet again to get to the RSPB Lakenheath Reserve.  Sadly the weather had not continued and conditions were rather grey and cold, but at least things were dry!

A period of time spent at the new open hide overlooking what I call the "penultimate reedbed" produced little, other than a couple of Marsh Harrier. Neither did any encouraging song arise from the nearby plantation renowned for its Golden Orioles, despite claims of occasional calls being heard in preceding days. By now I'd met with Chris and John Hamilton  and we all moved on to take watch over the large, main reed bed.  Good fortune accompanied the decision with prolonged views of a Bittern  being gained as it flew above the reed bed, did a wide U-turn and then returned to its original patch. A nearby Cettis Warbler entertained everyone , not just with its loud bursts of song, but with its repeated flights across an open area between reeds. Numerous Marsh Harriers kept everyone entertained until a single Common Crane ( 2013, 206 ) silently left the marsh and flew across to a nearby feeding area. Shortly afterwards a single Common Tern ( 2013, 207 ) flew around in front of the hide before departing elsewhere.

Moving back to the original observation position, the number of people gathered along the footpath was an indication that our mutual objective was in view. The sight of two Hobbies (2013, 208 ) and the male Red-footed Falcon (2013, 209 ) swooping over the heads of the assembled throng was amazing in itself, that the birds were in such close proximity was bordering on the unbelievable! 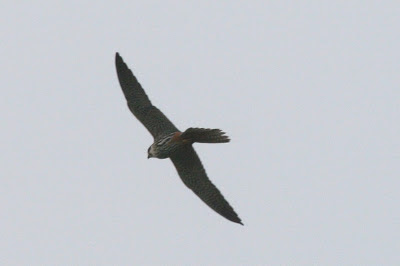 Sadly, the conditions were a bit dark when I finally managed some photographs, but the experience of two Hobby leisurely swirling around overhead was enthralling in the extreme. ( Click on the above to enlarge the image and see the beautiful underwing patterning on the bird). 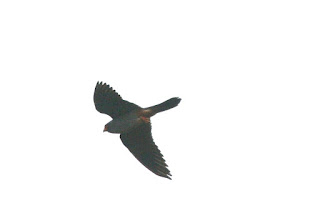 A similar examination of the male Red-footed Falcon photograph shown above sees the feet sufficiently well enough to explain the derivation of its name, in addition to a glimpse of the vivid undertail coverts.

After spending most of the day at Lakenheath it was still difficult  to decide to leave these magnificent raptors behind, but the Hobbies suddenly moved off and the Red-footed Falcon "retired" to perch up in a nearby plantation, where it was still in view but had clearly completed feeding for a while. A great experience!

There was still enough time to call up to Weeting Heath NWT Reserve and watch the couple of Stone Curlew which were on view. Sadly, such has been the desperate Spring we've had this year,that a number of these birds had been found dead in East Anglia a few weeks ago when conditions were clearly too severe to ensure their survival.  Overall a pretty good day!!

Posted by John S. Armitage at 2:13 PM
Email ThisBlogThis!Share to TwitterShare to FacebookShare to Pinterest