I've just read the third and most recent report of the Northern England Raptor Forum which summarises work undertaken in 2011. Copies of the reports are still available.......all are worth reading!! 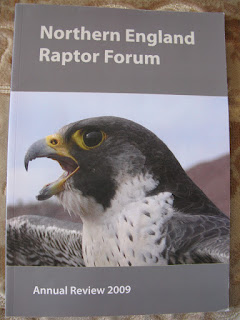 The forum currently consists of  eleven raptor study groups operating across Northern England ( Bowland, Calderdale, Cumbria, Durham, Manchester, Northumbrian, North Yorks Moors, Peak District, South Peak,  South Ryedale and East Yorkshire and the Yorkshire Dales Group ). All are comprised of volunteers and undertake monitoring and ringing activities across their respective "patches", besides assisting the RSPB and the Police when and if persecution activities arise.

All the reports are produced to a very high standard and contain some excellent photographs of raptors. Against an exhaustive list of raptor species present within Northern England groups present a report of their activities during the year (if relevant ) and an overall Regional Summary is provided too. Accompanying all this is a National and Regional Threat Assessment.  Where relevant comparative data is presented within the species accounts  in a series of very clear histograms or graphs that are precisely labelled and easily understood. In the nature of all annual reports a Foreword is given by an invited contributor followed by a Chairman's Report , Secretary's Report and an Annual Review. The latter serves as a very convenient reference point for subsequent visits to the Reports in order to gain assurance or correction on particular points you're dealing with at the time. Now it would be foolish of me to try and summarise the treasure trove of information and data contained within the first three reports and I've no intention of doing so. These are very professionally produced reports, containing precise source information on population trends and threats of the various raptor species within Northern England.  They should be used, widely quoted and provide the very essence upon which efforts to improve those populations rest. Why?  Because this is current data, collected by dedicated enthusiasts who know their own area and are best placed to comment on the trends which are emerging. Oh, and there's usually three or four papers included in each  report on specific raptor study elsewhere,  problems or behaviour.  As examples of a template which others might follow then the report format is certainly in the forefront of what might be selected.  As such they deserve to be read and promoted widely. Such reports are not cheap to produce, not least in the time required for compilation and editing so you all know what is coming next!! It's no use the information sitting on a Forum member's shelf, they need to be purchased, read and re-read!!

I'm told the stocks of reports are held by Judith Smith ( 01942 861759 ) and enquiries about purchases should be directed to her. Additionally, if anyone has any general queries to raise then these should be directed to Northern England Raptor Forum, c/o 25 Pinewood Crescent, Heighington, Co. Durham, DL5 6RR.  Act now and don't miss out on getting your own copy and learning of the real status of and threats affecting raptors in Northern England.


Posted by John S. Armitage at 9:07 AM
Email ThisBlogThis!Share to TwitterShare to FacebookShare to Pinterest