What we're really up against when it comes to the persecution of Hen Harriers and other raptors.

Reading recently various comments on Bird Forum about raptor persecution prompted me to have yet another good think about the issue.
Whilst the comments expressed are heartfelt and raise certain criticisms of the current Government for non-intervention based on vested self-interest by senior members, they are wrong in part of their analysis. The reasons are far more deep seated than that!  This is NOT a recent phenomenon, although its most recent manifestation has now seen the decimation of the English breeding population of Hen Harriers. And it's not exclusively about commercial interest either. It's about authority, power and choice!!

It seems to me that the Private Estates within the UK are acutely aware that their independence of yesteryear is increasingly being put under scrutiny and pressure. Whether it's Right to Roam, legislation protecting wildlife, the designation of areas under both national and European level and, therefore, their ability to do exactly as they please is being eroded away, albeit very gradually! They can no longer operate as they did previously behind fences and Keep Out notices and they resent it. At the same time we have to recognise that these areas do provide a natural haven for wildlife as well as for farming operations, forestry and, yes, for shooting too. The challenge, therefore, is to arrive at a solution that provides for all such "interests". Sadly there appears to be a significant proportion of upland grouse moor owners who see things differently and who are willing to ignore the requirements of law.

Raptor persecution in the cause of grouse management has gone on for a long time. Some of the carnage of the past is unbelievable, but it was done to secure the same ends as now, namely the removal of any potential  factors that work against shooting and its enjoyment by its minority following. Clearly there is a belief  by some that they can rise above the law in pursuit of self interest.  A "We know best position, we've always operated like this and have no damned intention of changing" attitude.  And that is key to the whole issue, an anachronistic position adopted to try and hang on to the halcyon days following the emergence of organized grouse shooting.  Any measures aimed at eroding such a position of independence are, therefore, vehemently condemned and opposed, or simply ignored.

Attitudes can take a long time to change which is why regulation is the only answer and the core reason why I registered the Epetition in the terms expressed. In my opinion such could result in a set of well framed regulations that hurt no one if they operate in a law abiding fashion. Of course, no Conservative Government , coalition partner or not, wishes to give overt support to measures that deliberately seek to embarrass its Establishment chums and such is the current situation. Such change will be a hard fought battle. Clearly the views of Natural England, the Government's advisor on countryside matters, are tempered by the requirements of political expediency. The large conservation organizations no longer appear to wield the influence they have had. In many cases they now appear to have had any fire in their bellies quenched by sweet words and access to the corridors of power, wherein their advice is amiably received and then politely ignored. Of course there will be the occasional concession, but only if it suits the cause!

It remains to be seen whether the recommendations anticipated from the Law Commission review of wildlife legislation are embraced with enthusiasm or are surrounded by prevarication. I suspect they might reside conveniently in the long grass until a time emerges wherein they will suffer from "debate exhaustion". Sad, but it seems that's the lack of relevance afforded to environmental matters nowadays. Someone asked me recently why I continue to campaign and argue for change. Such a need for change is something I believe in , but also I believe that our wildlife heritage is something we should all be able to enjoy without self serving and negative influences affecting the situation.  I'm reminded too of twenty years of being involved with Hen Harrier protection in the Forest of Bowland, Lancashire and the succession of contract staff and volunteers who stoically gave of their utmost, in sometimes difficult circumstances, to try and bring about positive change. None have given more than my two old friends, Bill Murphy and Bill Hesketh, who similarly believe in a raptor presence to be enjoyed by all and have given forty years of effort in this regard. 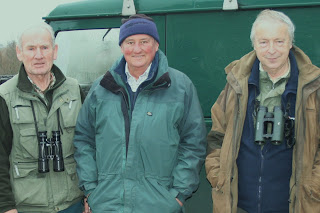 So , you know what comes next ,folks!  Please sign the petition to add to a body of opinion that calls for a change in the fortunes of our UK raptors.  Licencing of upland grouse moors and gamekeepers.

Thank you.
Posted by John S. Armitage at 1:16 PM
Email ThisBlogThis!Share to TwitterShare to FacebookShare to Pinterest