After another fairly routine day I was relaxing back at home, pondering over some information about sea birds and feeding grounds, when I heard a commotion around the house. Now, in order to appreciate this entry, you require to know a little about the location I live in.  My neighbours lie quite a distance away in either direction and I suppose I'd qualify for being in a super-rural location!! 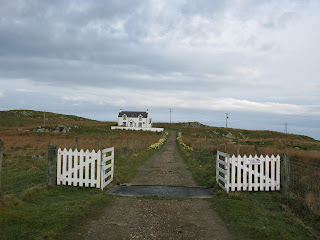 Now what you also need to know is that my garden is, well, overgrown!  Well overgrown it could be said!  It's quite deliberate and echoes my attempts to attract Corncrakes , somewhat unsuccessfully, into its tangle of vegetation. As you can see the garden isn't large and is confined by low walls tight to the house. Following all the commotion I looked out and saw around 90 Starlings going in all directions. Starlings were actually diving into the long vegetation in order to seek out cover!  Imagine my surprise when the next actor entering onto this stage of utter chaos was a male Hen Harrier!  It swooped over the garden at the Starlings, unsuccessfully, and tried several times more before moving off. I even ducked on one occasion given its close proximity to the house and I can truthfully say that being stared in the eye by the piercingly bright yellow of a Hen Harrier's targetting mechanism makes you feel every much a potential prey item as a Starling!!!

I expect it will return as long as the Starlings continue to feed nearby and perch out on the barn roof or on one of the two squat bushes in the garden. From experience I could even suggest that to keep a look out between 1600-1700 hours would be productive as hunting harriers do seem to keep to some form of schedule each day whilst feeding young.  Last year Hen Harriers were absent locally, i.e. close to the house, which was a great shame after enjoying a  relationship with a regular pair over several years.  I'd seen both these adults hunting locally on several recent occasions, but farther away from the house, so it was a nice surprise to realise they weren't that far away.  Not a bad reward for a harrier fanatic!!
Posted by John S. Armitage at 4:47 PM
Email ThisBlogThis!Share to TwitterShare to FacebookShare to Pinterest